McGuinty and Selinger in majority territory

With less than two weeks to go in Ontario’s election campaign, voters remain split on who should form the province’s next government. But that is good news for the incumbent Liberals, since were an election held at the end of last week Dalton McGuinty would have likely won a razor-thin majority.

To read the full details of today's Ontario projection update, check out The Globe and Mail website here. The riding projection in the right-hand column is also updated.

A few words on the Forum Research poll that came out this Saturday. The size of the poll should not be over-emphasized. The +/- 0.5 point margin of error only applies to a truly random sample, and of course no poll is taken in a vacuum. As many pointed out during the census debate, increasing the sample size doesn't erase errors in the methodology. That is not to say there is a problem with Forum's methodology, only that a poll of 40,000 people isn't automatically the be-all and end-all of polling.

Because the poll was so large, riding level numbers were also released. Aside from a few cases, often in ridings that the firm itself called "anomalies", the riding polls in the GTA matched comfortably well with my own projections. I haven't seen many numbers outside of the GTA yet, however.

But the big news today is out of Manitoba. CJOB News is reporting on a new poll by Viewpoints Research. As it is radio, they are stretching out the release of details throughout the day, so for now all we have is the decided vote: 41% for the New Democrats, 32% for the Progressive Conservatives, and 5% for the Liberals. Another 19% are undecided, which means we can extrapolate that 51% of decided voters are supporting the NDP, 40% the Progressive Conservatives, 6% the Liberals, and 4% the Greens.

As I am starved for new information out of the province, I will use these numbers for the projection until the full decided/leaners details are released later today. Another poll is apparently scheduled for release tonight, so the situation in Manitoba is finally going to be a little clearer. 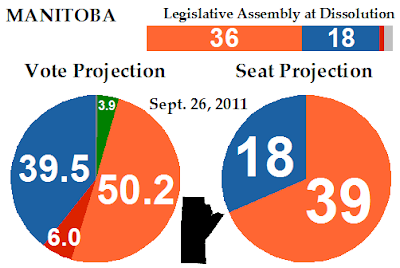 The New Democrats are now projected to take 50.2% of the vote, up 10.3 points since the last projection from the end of July. The Progressive Conservatives are down 4.8 points to 39.5%.

The Liberals have sunk 5.5 points to only six per cent support, while the Greens are down 0.1 point to 3.9%.

This results in the New Democrats winning 39 seats in the 57-seat legislature, a comfortable majority. The Progressive Conservatives win 18 and the Liberals are shut-out (though just barely). That is a gain of six seats for the NDP since the last projection and a loss of two for the Liberals and four for the Tories.

The New Democrats have picked up two seats in the southeast and four in Winnipeg, giving them 27 of the 31 seats in the capital. They are running close to the PCs in the rest of the province, however, with 12 seats to 14. The Tories have lost two seats in southeastern Manitoba and three in Winnipeg, but gained one seat from the Liberals in the capital. The New Democrats took the other.

There are only a few close races in the province, and the Liberals are implicated in one of them. Otherwise, the seat range for the NDP and Tories is between 16 and 20 seats for the PCs and 37 and 41 seats for the NDP.

The ranges chart gives a visual representation of the distance between the parties. 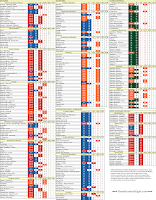 With the new numbers being put out by CJOB today and the rumoured other numbers appearing tonight, I should be able to update the Manitoba projection tomorrow as well. Prince Edward Island is going to report soon, and Manitoba is supposed to have at least one more poll at the end of the week. We'll undoubtedly have some new Ontario numbers soon as well.

Also, check out my column in today's The Hill Times. It requires a subscription to read online (the paper edition is available in many downtown kiosks in Ottawa), but is well worth it (the online subscription, that is).
Posted by Éric at 9:08:00 AM