On Monday, Nanos Research released its latest federal numbers for The Globe and Mail, finding that the Conservatives and New Democrats are on the up-swing at the expense of the Liberals. But in the end, all we really get is the status quo. 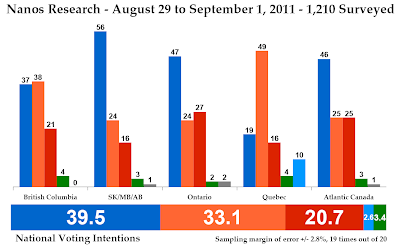 Compared to Nanos's last poll taken at the end of July and the beginning of August, the Conservatives have gained 3.2 points and lead with 39.5% support. They had 39.6% on election night.

Though this indicates real movement, the Nanos poll that had the Liberals and NDP tied was different from every other poll. So, in all likelihood, this Nanos poll is more of a reset.

In Ontario, the parties are generally where they stood on May 2nd with a slight increase for the Conservatives. Compared to their earlier poll, the Tories are up nine points to 46.9%, well ahead of the Liberals (26.7%, down 5.5 points) and the NDP (24.4%, down 0.4 points). This alone more or less guarantees a Conservative majority.

Nanos has the NDP dominant again in Quebec, up 14.7 points to 48.9%. The Conservatives drop 5.4 points to 18.8%, while the Liberals are down 6.1 points to 16.1%. The Bloc is down 7.7 points to 9.6%, a miniscule amount of support. Note, however, that Nanos has averaged 12.9% for the Bloc since the election, compared to 24.3% in the just-as-numerous Abacus polls, while Léger, Crop, Harris-Decima, and Angus-Reid have all had the Bloc at 18% or more. Nanos seems to be the dissenting opinion on Bloc support in Quebec.

The Tories comfortably lead in Alberta, Saskatchewan, and Manitoba, as is to be expected. 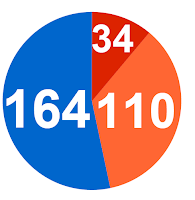 This poll would not result in a very different House of Commons. The Conservatives win 164 seats, the New Democrats 110, and the Liberals 34.

The Bloc Québécois is completely shut-out, while Elizabeth May is not re-elected.

The Conservatives win one seat in the north, 17 in British Columbia, 27 in Alberta, 17 in the Prairies, 75 in Ontario, five in Quebec, and 22 in Atlantic Canada. Their losses in the West are made up in the East.

The New Democrats win one seat in the north, 14 seats in British Columbia, one in Alberta, six in the Prairies, 20 in Ontario, 62 in Quebec, and six in Atlantic Canada.

The Liberals win five seats in British Columbia, five in the Prairies, 11 in Ontario, eight in Quebec, and four in Atlantic Canada.

This poll was taken the week after the Layton funeral, so emotions might have still been running high. But we've seen elsewhere that the New Democrats are still doing very well in Quebec and appear to be in a very good position in British Columbia. Maintaining this level of support out West could be an important component of a future NDP government.

The only problem is, as it is always is for any party, Ontario. The New Democrats are far from a breakthrough in the province, but it is absolutely essential that they win another 20 seats or so in the province if they want to have a hope of winning more seats than the Conservatives nationally, as it is difficult to see where else their new seats could be won.
Posted by Éric at 11:02:00 AM