Liberals might not have hit rock bottom in 2011 election

A poll released by Léger Marketing earlier this week shows that the federal race is still very much between the Conservatives and the New Democrats, but also that the Liberals could potentially sink even further.

A full detailed report of the poll is not available on the Léger Marketing site (which is rare), but it was mentioned in various news reports. A helpful journalist sent along the report to me at my request. A CROP poll on the voting intentions of Quebecers was also released this week, and is included in the graph below. 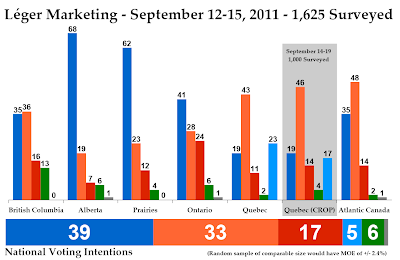 In the Léger poll, the Conservatives stand at 39% support, compared to 33% for the New Democrats and 17% for the Liberals.

This is the first federal Léger poll since the election was held on May 2.

In Ontario, Quebec, and Alberta, this poll is not much different from the results of that vote. Notable, though, is that the New Democrats are holding steady in Quebec and have marginally improved their position in Ontario. Both are important provinces for the NDP moving forward.

The results in Quebec are not very different from Léger's last poll in the province, conducted in June. Since that poll, the NDP has dropped three points, the Bloc has gained one, the Conservatives have gained four, and the Liberals have dropped three. None of these changes are especially significant, but it does suggest that the passing of Jack Layton has had no real effect on NDP support in the province.

British Columbia is interesting, as it echoes the recent Nanos poll putting the New Democrats and Tories in a statistical tie but with the NDP holding the edge. This is going to be a very, very important province for the New Democrats.

Elsewhere, we can see that the NDP is holding an unrealistic lead in small-sample Atlantic Canada, and that the Tories are doing well in the Prairies.

CROP found a very similar result in Quebec, but had the NDP at 46% and the Bloc at 17%. Where the Bloc's support stands is a subject of some dispute, as Nanos had them at 10%. Perhaps most significantly, virtually every poll released since the election has the Bloc at or below their vote share on election night.

CROP last released data on the federal situation in mid-August, just before Jack Layton passed away. Since then, the NDP is up six points, the Conservatives are down three, the Bloc is down three, and the Liberals are up two. The NDP's gain is statistically significant, providing further indication that NDP support in Quebec is not nearly as fragile as almost everyone has thought it would be. 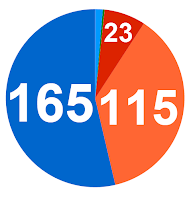 This poll results in another Conservative majority with the New Democrats as the Official Opposition. The Tories drop one net seat and win 165 overall, while the New Democrats bump up their seat total from 103 (including Toronto-Danforth, that is) to 115. The Bloc holds on to its four seats while Elizabeth May is re-elected in Saanich-Gulf Islands.

But the Liberals lose 11 seats in this poll, taking only 23. An even more nightmarish scenario than the one in May can still play out for the Liberals in the future.

The Conservatives win 17 seats in British Columbia, 27 in Alberta, 25 in the Prairies, 69 in Ontario, eight in Quebec, 17 in Atlantic Canada, and two in the North.

The New Democrats win 14 seats in British Columbia, one in Alberta, two in the Prairies, 24 in Ontario, 60 in Quebec, 13 in Atlantic Canada, and one in the North.

The Liberals win four seats in British Columbia, one in the Prairies, 13 in Ontario, three in Quebec, and two in Atlantic Canada.

UPDATE: I should point out, as was done by a commenter, that much of the Liberal seat woe is due to an unlikely result in Atlantic Canada, where sample sizes are small (79, in this case). But even if the Liberals were at, say, 25% or so in the region they would still be somewhere around 17% and 18% nationally and in trouble in Quebec.

Yes, the New Democrats are still leaderless and, yes, the next election is four years away. But the sky has not yet fallen on the NDP and Canadians haven't yet recoiled from electing a Conservative majority. Believe it or not, real work will have to be done by the parties in order to move public opinion!
Posted by Éric at 9:59:00 AM