NDP gains in Manitoba and PEI, Selinger and Ghiz on track for re-election

Yesterday, I was alerted to a poll that was released by MarketQuest Omnifacts Research for Prince Edward Island. This is the same firm which broke the ice in the Newfoundland and Labrador campaign. Few media outlets picked up the poll, but I have the details and so the Prince Edward Island projection has been updated.

But before getting to the MQO poll and PEI, let's take a look at the new poll by Probe Research for the Winnipeg Free Press.

The telephone survey, taken between September 21 and 28 (and so dipping its toe into the survey dates of both the Viewpoints Research and Environics polls) and interviewing 1,000 Manitobans, found that 46% support Greg Selinger's New Democrats, with another 43% intending to vote for the Progressive Conservatives.

Considering the margin of error, this is no change at all since Probe's last poll from the end of June which put the NDP and PCs tied at 44% and the Liberals at 9%. But coupled with the polls from Viewpoints and Environics, we can say that the NDP is ahead.

They are particularly ahead in Winnipeg, with 53% to 35% for the Tories. Outside of the city, the vote intentions are flipped: 54% for the Tories and 34% for the NDP. A big problem for the PCs is that in Winnipeg they only lead in the southwestern part of the city, and there by a statistically insignificant three points. It doesn't seem that the Tories will have much luck in the city.

It's worth noting how the polls have changed over time in Manitoba. PC support has been remarkably consistent, hovering between 40% and 47% for at least a year. But the NDP has taken off, standing in the mid-40s after being in the mid-30s in the spring. And the Liberals have sunk below the symbolic 10% mark. 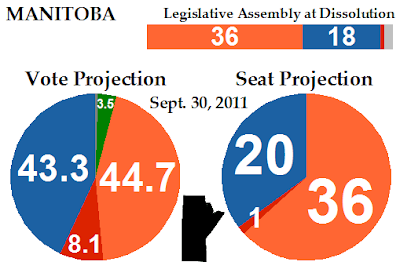 With this poll, which I suspect will be the last of the campaign, the New Democrats are projected to win 44.7% of the vote, with the Progressive Conservatives taking 43.3%.

This has not resulted in any seat changes. The New Democrats are projected to win 36 seats, the Tories 20, and the Liberals one.

With the NDP gain, several seats have dropped out of the PCs' range. Only one Tory seat and one NDP are now considered close, putting the NDP range at between 35 and 37 seats and the PC range at between 19 and 21 seats.

The NDP's advantage in Winnipeg is extraordinarily important, as the city has over half of Manitoba's ridings.

Now to Prince Edward Island. The poll by MarketQuest Omnifacts was taken both over the telephone and online between September 23 and 25. Surveying 411 people, the poll is smaller and somewhat older than The Guardian's poll by CRA. But the results are not much different.

The NDP level of support is problematic, as they aren't running a full slate of candidates. And this is where we run into a problem - how to adjust for something like that? Should we assume that survey respondents don't know whether or not an NDP candidate is running in their riding? Certainly many, maybe the majority, are aware of this and so the voting intentions number may not inaccurate. It is a bit of a puzzle, but in any case it is unlikely that the NDP will play a big role in Monday's election. 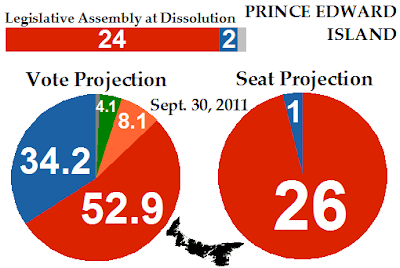 With this poll, the Liberals are now projected to win 52.9% of the vote, down 0.2 points since yesterday's projection. 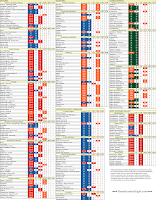