Ontario’s election has become a three-way horse race in a matter of weeks, with frontrunner Tim Hudak’s hope for a majority government slipping away on the eve of the campaign’s official launch.

Two recently released polls show that, while the Progressive Conservative leader still holds a lead over the governing Liberals, the race is tightening.

You can read the rest of the article, including individual projections for both this week's Angus-Reid and Forum Research polls, at The Huffington Post Canada website here.

On an unrelated note, I promised a seat projection for the Harris-Decima federal poll released earlier this week. The result is pretty interesting. But first, the poll itself. 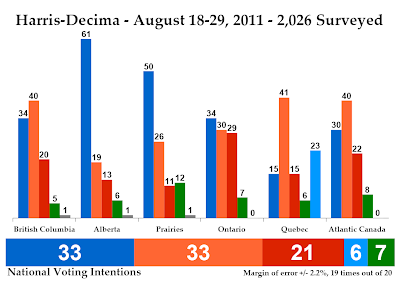 Harris-Decima has both the Conservatives and New Democrats tied at 33%, with the Liberals trailing at 21%.

I could be mistaken, but this is probably the first poll since the Ed Broadbent years that has the NDP tied for first.

While 33% is a few ticks up from the 2011 election result and is within the margin of error of other recent polls, that the NDP is in first has more to do with the Conservatives dropping. They stand seven points below their election result, which is quite an extraordinary drop.

Of course, this poll was taken during a pretty emotional time. Unless Harris-Decima polls over the weekend, it was only in the field for two days before Jack Layton's death. It was then in the field throughout the week following his death. Whether these numbers will hold will be something to look at when Harris-Decima next reports.

The NDP leads in British Columbia and Atlantic Canada, in addition to Quebec. The most interesting race is in Ontario, where the three parties are within each other's margin of error.

The problem for the NDP in this poll is their weakness on the Prairies. We can excuse them for having trouble breaking through in Alberta, but the NDP can do better in Manitoba and Saskatchewan. If the party was up a little bit more, they would likely be able to win a plurality of seats, as more than a few ridings in Saskatchewan were relatively close Conservative-NDP races.

Also noteworthy is Quebec, where the Tories stand at 15%. Some other polls have put them comfortably in third or even in second, but it would appear the strength of the Conservatives in Quebec is still very fragile. 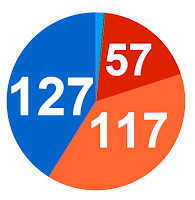 This would result in a very different House of Commons.

The Conservatives win 127 seats with this poll, the New Democrats 117, the Liberals 57, the Bloc Québécois four, and the Greens one.

Most significantly, the New Democrats and Liberals could combine for 174 seats - a majority larger even than Stephen Harper's current government.

But, of course, the current Conservative government holds only 7% of the seats in Quebec.

The Conservatives win one seat in the North, 14 seats in British Columbia, 27 in Alberta, 24 in the Prairies, 46 in Ontario, four in Quebec, and 11 in Atlantic Canada.

The New Democrats win one seat in the North, 16 in British Columbia, one in Alberta, three in the Prairies, 26 in Ontario, 60 in Quebec, and 12 in Atlantic Canada.

The Liberals win one seat in the North, five in British Columbia, none in Alberta, one in the Prairies, 34 in Ontario, seven in Quebec, and nine in Atlantic Canada.

The Bloc wins four seats in Quebec and the Greens win one in British Columbia.