A new poll was reported today by the Regina Leader-Post and the Saskatoon StarPhoenix, showing that Brad Wall's Saskatchewan Party has the support of almost two-thirds of voters in the province. Accordingly, Wall's fortunes have improved in the Saskatchewan projection.

Unfortunately, the poll by Praxis Analytics is vaguely described on at least two points and I'm looking into finding out more. Firstly, the dates of this poll are unknown. The report in the Leader-Post says that it was conducted during the last week of August and the beginning of September. I'm assuming that means to August 28th to September 3rd.

UPDATE: The poll was conducted between August 23 and September 5, with more of the interviews being taken after August 29.

Secondly, while support for the SP and the NDP is reported to the first decimal point, that of the Liberals is reported as being at "almost" 6%, while the Greens are at 3%. It isn't a big problem, but it would be better to have the exact levels of support for all parties.

UPDATE: I've been informed by the good people both at the Regina Leader-Post and Praxis Analytics that Liberal support stands at 5.9%. This will be reflected in the poll chart at the bottom of this page with the next update. Reducing Liberal support in the projection model from 6% to 5.9% for this poll does not change the seat or vote projection.

The Saskatchewan Party stands at 63.4%, almost 40 points ahead of the New Democrats. They are at 26.1%. Most damaging for the NDP is that Brad Wall beats out Dwain Lingenfelter as the best man to be premier with "nearly" 79% to 13%. That is a huge spread.

I do not know anything about this polling firm, however, and from their website it seems to be based in Illinois. Perhaps there is another Praxis Analytics in Saskatchewan that doesn't have a website. But, one assumes that the two major newspapers in Saskatchewan are familiar with the firm.

UPDATE: Praxis Analytics is a Regina-based firm, unaffiliated with the one in Illinois that came up in an internet search. Their principals are formerly from Sigma Analytics, a Saskatchewan polling firm. 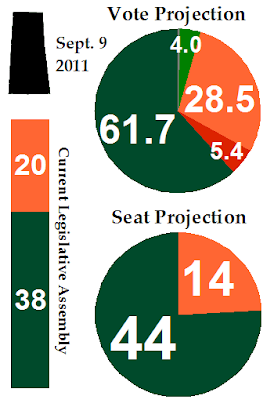 With this poll now in the projection, the Saskatchewan Party has gained 2.8 points and is now projected to win 61.7% of the vote. The New Democrats have slipped 2.5 points to 28.5%, while the Liberals are up 0.7 points to 5.4%. The Greens are down one point to 4%.

This has results in the SP picking up one seat from the NDP. Wall's party is now projected to win 44 seats to the NDP's 14.

The pick-up for the SP is in southern Saskatchewan, and the party is now projected to win all 20 seats in the region. Only in Regina does the NDP beat out the Saskatchewan Party in total number of seats.

With a widening gap between the two main parties, a good deal of seats are now considered to be close races.

This puts the Saskatchewan Party range at between 43 and 51 seats, compared to a range of between seven to 15 for the NDP. In other words, Brad Wall could win 51 seats in the 58-seat legislature.

Where are these close ridings? Only two are outside Regina and Saskatoon, two are in Regina, and three are in Saskatoon. So, the election will have its share of heated contests in almost every part of the province. 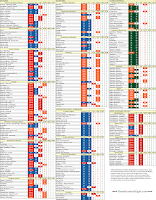 The vote in Saskatchewan is a little less than two months away, so things could still change if the campaign takes an odd turn or two. But when the leadership numbers have gap of about 66 points between the incumbent and the challenger, it seems extraordinarily unlikely that the NDP has a chance to turn things around.
Posted by Éric at 9:47:00 AM