McGuinty, Hudak bound for even split in early days of Ontario vote

After less than a week on the campaign trail, the race for the Ontario premiership is as tight as it gets. With polls showing leads for both the Progressive Conservatives and the Liberals, the election is, at this early stage, a toss-up. But were an election held today, Queen’s Park would be more divided than it’s been in more than 25 years.

Based on a weighted aggregation of the latest polls, ThreeHundredEight.com’s seat projection model puts the Progressive Conservatives and Liberals on track to win 44 seats apiece, with the New Democrats taking the remaining 19 seats in the 107-seat Legislature. With even numbers in the caucuses of both Dalton McGuinty and Tim Hudak, the NDP would be in a position to decide which man becomes Ontario’s next premier.

You can read the rest of the article on The Globe and Mail website, here, including discussion of regional breakdown and ranges.

But to give you a taste, six seats switched from the Progressive Conservatives to the Liberals since last week's projection. Two of them were in Toronto, while one each were in the GTA, Ottawa, and the southwestern and central parts of the province. 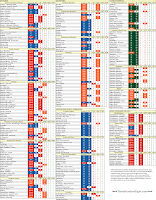 It is still very early going in the campaign, and no poll that was taken in its entirety after the writ dropped has yet to be released. The Harris-Decima poll, in blatant opposition to those from Nanos, Angus-Reid, and Forum, also muddies the waters. But remember that the Harris-Decima poll, having a small sample and also having been taken primarily in the same time period as the others (and so isn't rated as being much "newer"), only takes up a small proportion of the projection.

I'll be speaking on the Téléjournal Ontario tonight. It airs at 6:00 PM in most of the province, and 11:00 PM in the Ottawa area. If you have a satellite or digital cable you can probably find it even if you don't live in the province.
Posted by Éric at 12:48:00 PM