Hudak down to minority in new projection, updates to PEI and NL

New polls for the election races in Ontario, Newfoundland and Labrador, and Prince Edward Island were released yesterday.

In Ontario, Nanos released new numbers for CTV, The Globe and Mail, and CP24, showing the Progressive Conservatives at 35.4% to the Liberals' 31.9% and the NDP's 22.8%. This represents a significant drop for both the PCs and the Liberals (6.7 and 5.7 points, respectively) and a large gain for the NDP (up 6.6 points). The Greens stand at 4.1%, leaving an unusually large 5.8% leftover for the others.

I'm not quite sure what is going on with this poll, but if we distribute those five extra points proportionately, we end up with 37.8% for the Tories, 33.9% for the Liberals, and 24.2% for the NDP. 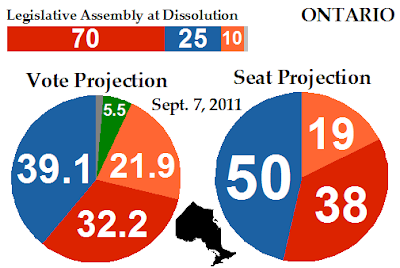 This results in the Progressive Conservatives dropping five seats to 50, four short of a majority government. The Liberals are up four seats to 38, while the New Democrats are up one seat to 19.

The New Democrats gain their seat in southwestern Ontario. They now stand at one in the region as a whole.

This is the second consecutive projection showing the Tories on the decline. Since July, they have lost 11 seats in the projection, 10 of them going to the Liberals and one to the NDP.

There are still a lot of close races in the province. The Tories lead 16 of them and trail in 14, while the Liberals lead 14 and trail in 16. The NDP now leads one of the close races, and is trailing in two others.

That puts the Progressive Conservative range at between 34 and 64 seats, the Liberals at between 24 and 54 seats, and the NDP at between 18 and 21 seats.

The chart above shows how the ranges look when stacked up against one another. This isn't a chart showing exact probability of each party winning X amount of seats, but is simply showing how the ranges overlap, or not. Obviously, any party winning all of the close races or losing all of the close races is very unlikely, which is why the chart has the seat totals nearest to the actual projection as the most probable. This chart also shows how much of the Liberal and Tory ranges are within majority territory.

Full riding projections can be found in the right-hand column or at the bottom of this post.

On to Newfoundland and Labrador, where the Corporate Research Associates peg PC support at 54%, ahead of the NDP at 24% and the Liberals at 22%. Though none of these results are outside of the margin of error in comparison to CRA's last poll in May, what is remarkable about these results is that the NDP is holding on to the support they had in that last poll. To my eyes, it looked like a possible blip. But this poll confirms that the NDP is in the race in Newfoundland and Labrador. 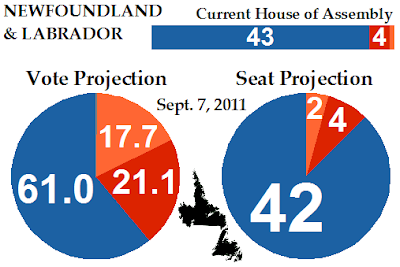 This shift has resulted in the Liberals picking up two seats from the Tories. The PCs now stand at 42, with the Liberals winning four and the NDP two.

The Liberals pick up one seat in the Avalon and Burin region, and another in the main part of Newfoundland.

This means that the Liberals are only being shut out of the St. John's region.

A few more races are now looking close in Newfoundland and Labrador. The Tories lead in six of them and trail in two, while the Liberals lead in two closes races and trail in three. The NDP also trails in one close race.

Finally, on to Prince Edward Island. The Corporate Research Associates poll for the province shows some change, with the Liberals up eight points to 59%, the PCs down four to 31%, and the NDP down six to 7%, but nothing groundbreaking. It does seem to indicate, however, that the NDP is not surging in every part of Atlantic Canada. 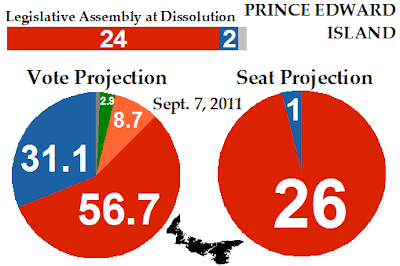 This has not changed the seat projection, which still stands at 26 seats for the Liberals and one for the Progressive Conservatives.

The only thing that has changed is the Liberal range. With the Liberals up and the Tories down, the one riding held by the Progressive Conservatives is now a close riding, meaning that the Liberal range now stands at between 26 and 27 seats, or a sweep. The PC range is between zero and one seat.

Now, a little bit about how ThreeHundredEight.com will be covering the provincial campaigns.

I do not know if there will be a poll for one of the provinces released every day, but I will be updating the projection on a daily basis when there are new polls available. On days with a new projection, there will often be a second daily post on another topic as well. 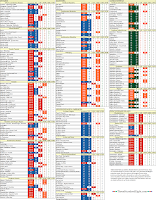 Weekly Ontario projections will be featured in The Globe and Mail on Mondays, while I will also be appearing on the Téléjournal Ontario on Mondays to speak about the provincial campaign (except for this week, when I am scheduled to appear today). I will also have my usual twice-weekly articles at The Huffington Post Canada, where I will analyze some of the emerging trends of the provincial campaigns, particularly those in Atlantic Canada and the Prairies.
Posted by Éric at 10:33:00 AM