Topp or Mulcair? Angus-Reid says neither

Over the weekend, Angus-Reid released a new federal poll that delved into the NDP leadership race. In addition to surveying the voting intentions of Canadians as they stand at the moment, Angus-Reid also asked how Canadians would vote if Brian Topp or Thomas Mulcair was the leader of the New Democratic Party. The poll finds that Canadians like the idea of the NDP more than the idea of either of these two men at the helm. 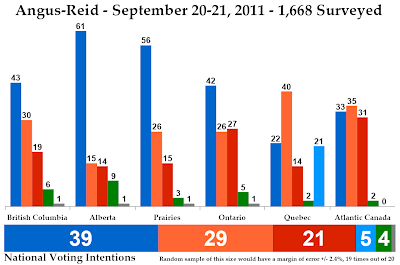 But let's first look at the federal numbers without naming one of the leaders.

Compared to Angus-Reid's last poll in early August, the Conservatives are unchanged at 39% support. The New Democrats are down two points to 29% and the Liberals are up two to 21%.

None of these changes are statistically significant, remarkable considering that the August poll was taken before the passing of Jack Layton.

But there were more changes in Quebec and British Columbia. In Quebec, the NDP is up five points to 40%, trailed by the Tories (22%, unchanged) and the Bloc Québécois (21%, down one). The Liberals have slipped three points to 14%.

In British Columbia, the Conservatives are back up by six points to 43%, with the NDP falling eight points to 30%. The Liberals at 19% and the Greens at 6% haven't budged much since the August poll.

Elsewhere, Atlantic Canada is a close race while the Prairies and Alberta is a walk for the Conservatives.

But what if Thomas Mulcair or Brian Topp take over as leader of the party? 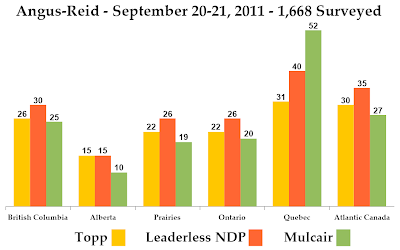 Angus-Reid also looked at what the situation would be with Gary Doer as head of the NDP. It is the worst of all, with only 24% support. But Doer has said he isn't interested, so his numbers are moot.

Regionally, the New Democrats without a named leader do better than either Mulcair or Topp in every part of the country, except one. In Quebec, Mulcair would take 52% of the vote while Topp would only take 31% and the leaderless NDP 40%. In every other part of the country, though, Topp bests Mulcair.

However, the way the numbers breakdown is far less advantageous for the New Democrats under Topp.

With the poll results that did not name a leader of the NDP, the Conservatives would be projected to win 156 seats, with the NDP taking 100 and the Liberals 48. The Bloc wins three and the Greens one. This is a very, very slim majority for the Conservatives. 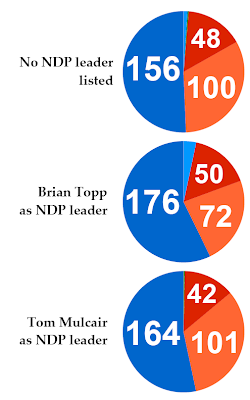 But under Topp, the NDP would only win 72 seats. The Conservatives would increase their caucus to 176, the Liberals would win 50 seats, and the Bloc would take 10 seats.

With Mulcair as NDP leader, the Conservatives win 164 seats, the New Democrats 101, the Liberals 42, and the Greens one. Except for the complete disappearance of the Bloc and the increase of the Liberal caucus by eight MPs, this doesn't represent much change from the current make-up of the House of Commons.

Regionally, it gets interesting. Mulcair's NDP caucus would include 70 MPs from Quebec, while Topp's would have only 37.

In British Columbia, the Conservatives win 21 seats (26 with Topp as NDP leader, 24 with Mulcair as leader), the New Democrats win 10 (six with Topp, six with Mulcair), and the Liberals four (four with Topp, three with Mulcair). In the Topp scenario, the Greens do not re-elect Elizabeth May.

In Alberta, the Conservatives win 27 seats and the New Democrats one in the generic and Topp scenarios, while under Mulcair the NDP loses their one seat in the province.

In all three scenarios, the Conservatives win 23 seats in the Prairies, the Liberals win three, and the New Democrats win two.

In Quebec, the generic scenario gives 55 seats to the NDP, 12 to the Conservatives, five to the Liberals, and three to the Bloc Québécois. With Topp as leader, the NDP wins 37 seats in Quebec, with 16 going to the Conservatives, 12 to the Liberals, and 10 to the Bloc. With Mulcair, the New Democrats win 70 seats and the Tories win the remaining five.

It could very well be that most Canadians don't know much about either Brian Topp or Thomas Mulcair, so having them at the helm of the NDP makes the party less attractive. But it does give some warning to those who think Topp can win in the "Rest of Canada" and Mulcair can't. Yes, Topp would take 35 seats outside of Quebec to Mulcair's 31, but with Topp at the helm the NDP would lose 22 of its MPs in Quebec. Mulcair would have every NDP MP from Quebec re-elected, and add 11 to the province's caucus.

That is if nothing changes, of course. And things will. But as it stands, neither leader seems to be a slam dunk. Topp would do better in the rest of Canada, but would lose much of Quebec. Mulcair would struggle in the rest of Canada but keep Quebec. It's a difficult choice for a party in a delicate position.
Posted by Éric at 11:58:00 AM