A poll by Léger Marketing over the weekend demonstrated how volatile the electorate is in Quebec. With François Legault's CAQ on the scene, the new party would easily win a majority government and the Liberals and PQ would fight for the scraps.

But take Pauline Marois out of the picture and replace her with Gilles Duceppe, and the result is very different. 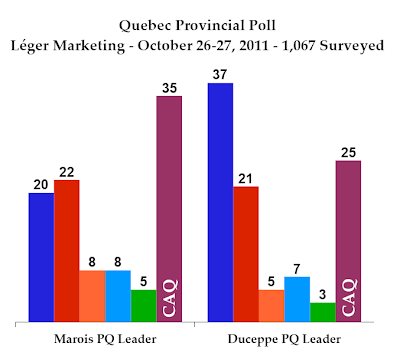 With Marois as leader of the PQ, the party would manage only 20% support, compared to 22% for the Liberals and 35% for the CAQ.

The ADQ and Québec Solidaire would be tied at 8%, while the provincial Greens would take 5% of the vote.

But with Gilles Duceppe as leader of the PQ, the party would win 37% of the vote. The CAQ would drop to 25% and the Liberals to 21%.

The ADQ, Québec Solidaire, and the Greens would share the rest, all of them losing some of their support.

This does not appear to be a specifically anti-Marois phenomenon, as with Pierre Curzi or Bernard Drainville heading the Parti Québécois there is very little difference. In fact, Marois would do as well or better than these two figures often cited as eyeing the job.

Legault should hope that Marois stays on, as he would win about 94 seats with this kind of support, pushing the Liberals to 17 and the Parti Québécois to 10. It is difficult to peg how the CAQ would perform with this kind of gap, but we're certainly looking at a big majority.

But Gilles Duceppe would also win a big majority if he entered provincial politics. With him at the helm, the PQ would win 80 seats, with 23 going to the Liberals and 20 to the CAQ. That is a huge difference.

There are still so many unknowns, however. Both Legault and Duceppe would need to go through the gauntlet of actually leading a party, and both could suffer as a result. Jean Charest cannot be under-estimated, and if Legault disappoints when he throws himself into the ring we could see support leaking back to both the Liberals and the Marois-led PQ.

One thing to watch will be the by-election in Bonaventure, a riding on the Gaspé Peninsula. The Liberals have chosen a local mayor as their candidate, and they probably have a good shot of holding on to the riding after the resignation of Nathalie Normandeau. But she was relatively popular, so this could turn out to be more of a Normandeau riding than a Liberal riding. The big question, though, will be whether the CAQ will enter the race. I don't think Bonaventure fits the CAQ profile very well, so it would be risky to start the party off with a defeat.

But it might also be risky for François Legault to back down from a challenge.
Posted by Éric at 11:01:00 AM