With the provincial elections having taken up so much time, I'm a little late with the federal polling averages from September. But here they are.

Three national polls were released during the month of September, with another being released for Ontario only and another for Quebec only. In all, 7,337 people were surveyed in the September polls. 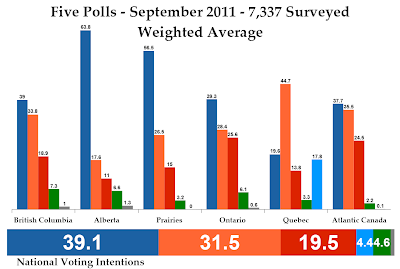 The Conservatives averaged 39.1% nationally last month, with the New Democrats second at 31.5% and the Liberals third with 19.5%.

This is a 3.2 point gain for the Conservatives since August. The New Democrats have picked up 0.5 points while the Liberals are down 2.1 points. The Greens are also down 1.1 points.

This is a very similar result to the May 2 election, but there are some variations at the regional level.

In British Columbia, the Conservatives are up 3.9 points and led in September with 39%. The New Democrats dropped 2.9 points and trailed with 33.8%, while the Liberals stood at 18.9% and the Greens at 7.3%. The race in B.C. remains relatively close between the Tories and the NDP.

The New Democrats gained 5.5 points in Quebec and led with 44.7%, above their election tally. The Conservatives are now second, though they dropped one point to 19.6%. The Bloc is running third after a 3.4 point drop to 17.8%, while the Liberals are down 0.4 points to 13.8% in Quebec.

Finally, in Atlantic Canada the Conservatives are up 4.1 points and the NDP 3.7 points. The Tories led with 37.7% and the NDP trailed with 35.5%, while the Liberals were far in the rear with 24.5% support. 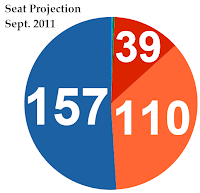 If an election had been held in September, the Conservatives would have won a slim majority government with 157 seats. That is a gain of 18 since the August projection. The New Democrats would have won 110 seats, a gain of one since August, while the Liberals would have dropped 17 seats and taken 39.

The Conservatives would have won 18 seats in British Columbia, 27 in Alberta, 23 in the Prairies, 61 in Ontario, nine in Quebec, 18 in Atlantic Canada, and one in the North.

The New Democrats would have won 12 seats in British Columbia, one in Alberta, two in the Prairies, 25 in Ontario, 61 in Quebec, eight in Atlantic Canada, and one in the North.

The Liberals would have won five seats in British Columbia, three in the Prairies, 20 in Ontario, four in Quebec, six in Atlantic Canada, and one in the North.

Before the 2015 election, however, the electoral map will be re-drawn. Since we do not know the boundaries yet, I cannot project for those extra seats. But assuming that the next House of Commons will have 334 seats, based on reports that have come out this week, and that Ontario will have 13 more seats, Alberta six, British Columbia five, and Quebec two, and assuming that those seats are won in a similar proportion to how the seats went provincially as a whole, the Conservatives would win 174 seats, the New Democrats 117, and the Liberals 41 in this 334-seat House of Commons, based on September support levels. 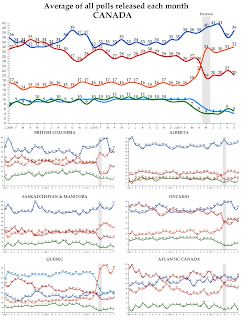 Aside from a blip in August, you can see that the parties have been generally stable since the May election at the national level. The same goes for Alberta, the Prairies, Quebec, and Atlantic Canada. But in Ontario and British Columbia, things have not been so steady.

In British Columbia the Tories have dropped quite a bit, much of that support seemingly having gone to the Liberals. This has put the NDP and Conservatives in a close race for the last two months. And in Ontario, the Conservatives have dropped from around 44% to between 38% and 39%. While neither the Liberals nor the NDP have really taken advantage, being below 40% in Ontario is problematic for the Conservatives. They can still win a majority government with that level of support, but it becomes one that is won on a knife's edge.

Unless the New Democrats take a tumble in Quebec, the next election will likely be focused on what happens in British Columbia and Ontario. But until the New Democrats are in a position to win 35 or more seats in Ontario, I cannot see how they can form the next government. Holding Quebec and conquering Ontario will be the challenge for the party's next leader.
Posted by Éric at 9:42:00 AM