Last night's election in Newfoundland and Labrador played out generally as expected, but around the margins the Liberals managed to cling to the role of the Official Opposition by a handful of votes.

A full analysis of the results of the Newfoundland and Labrador election can be read on The Huffington Post Canada website here.

For the projection, it was a bit of a rough ride. Though the final results were not significantly different from the final projection in terms of seats (at an error of 3.3 seats per party it ranks as the third best projection of seven), in terms of outcome it was greatly different. Yes, the Progressive Conservatives won a majority and the NDP made a historic breakthrough, but the Liberals outperformed expectations and won six seats instead of two.

The New Democrats also bucked provincial trends, doing much better in St. John's than was expected, winning a seat in western Newfoundland but losing what was supposed to be their best shot outside of the capital in Burin-Placentia West. 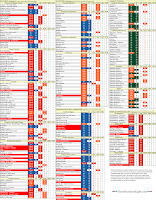 Another thing was the shift in votes from the last polls of the campaign, released a week before the vote. The New Democrats dropped by about five points and all of it went to the Liberals. The chart below shows the change. 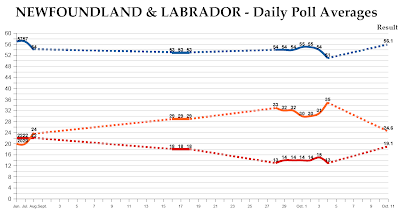 The Electoral Track Record has been updated, so you can see how the Newfoundland and Labrador projection stacks up to others.

Moving forward, we have one last election left this year. Saskatchewan should not hold many surprises, as the race is between two parties and Brad Wall has a massive lead over the NDP. It could play out more predictably, as the Manitoba election did. The site will be updated soon to give the Saskatchewan election more prominence.
Posted by Éric at 10:15:00 AM