Before getting to today's polls, a few words about Prince Edward Island's election last night. A full post-mortem will come after the Newfoundland and Labrador election, when there will be some time to digest the results.

There were only two polls conducted in Prince Edward Island during the campaign and none in the last six days. But they nevertheless under-estimated Tory support and over-estimated that of the New Democrats. Had the polls been accurate, ThreeHundredEight's projection model would have had the Liberals at 25 seats and the Tories at two. Still off, but a little better.

Now, projecting a slightly larger overwhelming Liberal majority than the overwhelming Liberal majority that actually was elected last night is not a huge problem. It is Prince Edward Island, a province with a population smaller than a few ridings in Ontario. When two PC ridings were won by about 30 votes and 425 votes separated my high seat range of two from their result of five, I don't consider the model to have failed.

But the under-estimation of Conservative support, the third consecutive time this has happened in an election I have done projections for, is vexing. I will take a close look at it before making my final Manitoba projection later today.

One poll was released this morning by Nanos Research, as part of their rolling three day polling. Taken between October 1 and 3 and surveying 900 people, Nanos finds Liberal support standing at 37.7%, followed by the Tories at 33.2% and the NDP at 25.8%. This matches EKOS's latest findings in that the Liberals are beginning to pull ahead. Though the sample sizes are small, Nanos even has the Liberals over the 40% mark over the last two days. 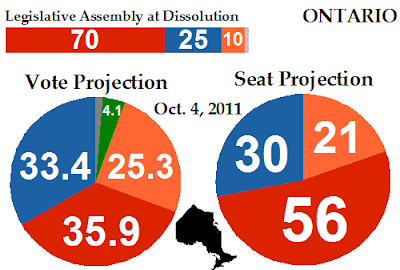 With this Nanos poll added to the projection, the Liberals now stand to take 35.9% of the vote, with 33.4% going to the Progressive Conservatives.

This is a gain of 0.7 points for the Liberals and 0.1 points for the NDP since yesterday's projection. The Greens have dropped 0.2 points and the Tories 0.6 points.

One seat has changed hands as a result, with the Liberals now up to 56 seats and the Progressive Conservatives down to 30. The New Democrats remain at 21 seats.

The Liberals are now projected to win 12 seats in the region, with seven going to the Tories and two to the New Democrats.

As mentioned, the bar for the seat ranges has now been moved to six per cent as a result of the PEI election. This doesn't change too much in Ontario, however.

The Liberals are leading in eight close races and trailing in five, putting their seat range at between 48 and 61. This is significant, as the Liberals are now at about even odds of pulling out a minority or majority government on Thursday.

The Progressive Conservatives lead in four close races and trail in six, putting their seat range at between 26 and 36. Things need to change in order for the Tories to be back in the race to form government.

The New Democrats lead in two close races and trail in three, putting their seat range at between 19 and 24. If things continue to go badly for the Tories, a scenario in which they finish third is not out of the question.

When MQO Research put Liberal support at 13% last week, Kevin Aylward, leader of the Newfoundland and Labrador Liberals, put out a press release accusing the Tories of having bought and paid for the poll. It was an unusual thing to do, as most political leaders brush poll results aside. It was a risky gamble that would pay off if the next poll put the Liberals up.

Well, it didn't. The latest poll by NTV and Telelink, conducted between October 1 and 2 and surveying 511 people by telephone, puts Progressive Conservative support at 58.9% of decided and leaning voters. The New Democrats follow with 28.4% while the Liberals stand at 12.5%.

In other words, this plainly independent poll is even better for the Tories and worse for the Liberals than the poll by MQO Research.

Kathy Dunderdale comes out even better on the leadership question, with 55% saying she is the best person for the job. Lorraine Michael of the NDP follows with 19% while Aylward is at 7%. 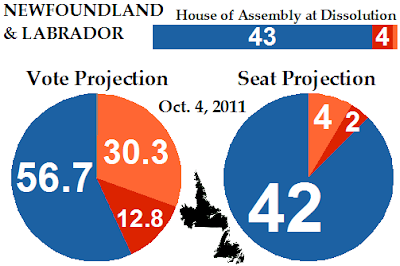 With this poll added, the Progressive Conservatives are now projected to take 56.7% of the vote. The New Democrats follow with 30.3% and the Liberals come up in third with 12.8%.

This represents a gain of 2.9 points for the Tories and a drop of 2.5 points for the NDP since the last projection. The Liberals are down 0.4 points.

This has not caused any changes in the seat projection.

The Progressive Conservatives are still projected to win 42 seats, the New Democrats four, and the Liberals two.

This has nudged a few seats out of being considered close races. The Liberals and NDP each lead in one close race, trailed by the Tories.

This puts the PC seat range at between 42 and 44 seats. The New Democrats are projected to win between three and four seats and the Liberals between one and two seats. 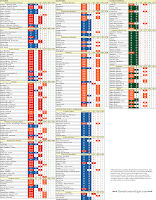 There is still a week to go before Newfoundland's vote, and I expect two or three polls before then. But Newfoundland and Labrador will pose some of the same problems as Prince Edward Island. The ridings are about twice as large, but they are still very small and subject to local factors to a degree that other provinces, particularly Ontario, are not. The polls seem to be relatively consistent, though, so the big question will be how they translate into seats.

I will post the final projection for Manitoba shortly, incorporating the latest poll from Angus-Reid.
Posted by Éric at 9:25:00 AM