Will inquiry change the game in Quebec?

n the face of enormous public pressure, Jean Charest has finally called a commission of inquiry into Quebec’s construction industry.

Calling the inquiry was as much of a political risk for the wily premier as it would have been to close his eyes and ears to overwhelming demand.

But the inquiry's limited scope and power will undoubtedly leave many Quebecers disappointed. And with François Legault's Coalition pour l'avenir du Québec (CAQ) set to become a party on Nov. 14, the inquiry is unlikely to turn the tide that is running against the governing Liberals, if it doesn't sink them entirely.

It appears we can already say that Charest's inquiry is not going to help. A poll by Léger Marketing indicates that only 23% of people are satisfied with the parametres of the Charbonneau commission. That is not good news for the Quebec Liberals, especially in light of this week's voting intentions poll. 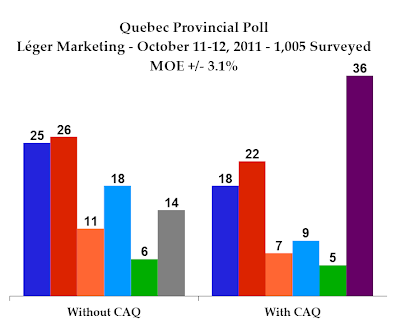 That 23% seems to be the Liberal floor. Without the CAQ in the mix, which it will almost certainly be starting November 14, the Liberals narrowly hold an edge over the Parti Québécois, though the 14% for the "Others" is a little disingenuous.

But with CAQ in the mix, the Liberals fall to 22%, 14 points behind the CAQ. That is a huge margin. For the Parti Québécois, it is near extinction.

Otherwise, it isn't horrible news for Jean Charest. Though usually this kind of tie benefits the PQ, with the PQ so low and the ADQ and Québec Solidaire so high, the Liberals would win a minority government with the non-CAQ numbers: 55 seats for the PLQ, 50 seats for the PQ, 16 for the ADQ, and four for QS.

However, the National Assembly is a hodge-podge of parties and independents. If we have all of those independents on the ballots as independents in the next election, the result would be instead 57 seats for the Liberals, 45 for the PQ, 16 for the ADQ, four for QS, and three for the independents.

The seat projection model for the CAQ scenario is still in a rough draft. It will be improved after the CAQ becomes a full-fledged party. But the rough numbers show that with this kind of 14-point lead over the moribund Liberals, François Legault's party would win 106 seats, leaving only 13 to the Liberals and three apiece to the PQ and Québec Solidaire. This kind of vote split is murder for the other parties.

Quebec's political scene is in turmoil, to say the least. The Liberals are holding an inquiry that many expect could be a Gomery-lite, the PQ is tearing itself apart, Québec Solidaire is hoping to benefit from the NDP's breakthrough, the ADQ is on the verge of being swallowed, another sovereigntist party is in the works, and the CAQ is about to storm onto the scene. Hold on to your hats.
Posted by Éric at 9:12:00 AM