Redford leading the way in Alberta

With Alison Redford at the helm, the Progressive Conservatives are back in their comfort zone, holding a huge lead over their rivals in Alberta.

As the MLAs begin what will be a short fall session in Alberta's legislature this week, many are already thinking about the next provincial election, rumoured to be called before June 2012.

The Wildrose Party, currently the third party in the legislature, does have a strong lock on second place in Alberta, and is likely to form the province's next Official Opposition. But this is a far cry from the double-digit lead Danielle Smith's party enjoyed for a brief period last year.

The article gives an overview of the three polls that have come out of Alberta in the past two months: one of them before the PC leadership race ended (ThinkHQ Public Affairs), one of them during the final round of voting (Lethbridge College), and one of them after Alison Redford was chosen as leader of the Tories.

That last poll is recent, as it was released on Saturday. Here are the details of the Angus-Reid poll. 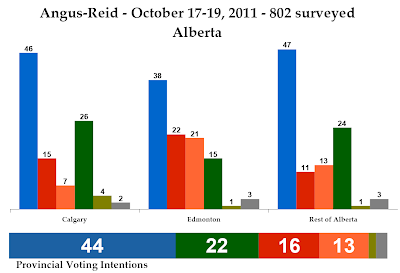 It really is a race between the Progressive Conservatives and the Wildrose Party in Calgary and outside of the two main cities.

In Edmonton, the Tories have the edge but all the parties are competitive.

The Lethbridge College poll had similar regional results, except with Wildrose at somewhat lower levels of support everywhere.

No one can deny that Redford is, for now at least, popular. On the question of who would make the best premier, Redford topped the list at 32%, followed by Wildrose leader Danielle Smith at 15% and Raj Sherman of the Liberals at 8%.

Redford also has a 55% approval rating, compared to 35% for Smith. These numbers could hold, or they could change dramatically as her premiership gets going. But it appears that Albertans are going to give her a chance. 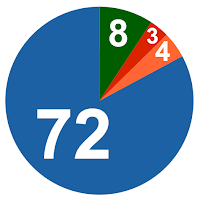 They might also give her another majority government. With these Angus-Reid numbers, the Progressive Conservatives win 72 seats. Wildrose takes eight and forms the Official Opposition, while the NDP wins four and the Liberals three.

The projection model for Alberta is in an early stage, and it will be tweaked and prodded to make it a regional model before the election comes around in 2012, if it does. Luckily, there is generally agreement on how to break down Alberta's results among the pollsters active in the province.
Posted by Éric at 10:38:00 AM