Wall still on track for huge majority in Saskatchewan

After weeks and weeks of silence, two polls were released in the last 24 hours for the provincial campaign in Saskatchewan, hot on the heels of Tuesday's leaders' debate.

The online poll by Saskatchewan-based Insightrix Research found that Brad Wall's Saskatchewan Party is still well in the lead with 60% support of decided voters. The New Democrats trail well behind with 33.3%, while the Greens are in third with 3%. The Liberals, who are only running nine candidates in Saskatchewan's 58 ridings, ended up with 2.8% of the vote. In order to get that vote share, the Liberals would have to average between 15% and 20% in their nine ridings, which is highly unlikely.

Only about 29% of Saskatchewanians watched part or all of the debate, but of those fully 53.7% said Brad Wall did a better job. Only 13.9% said the NDP's Dwain Lingenfelter did better.

Forum Research also weighed in with a similar result. It found Saskatchewan Party support at 66%, with the New Democrats at 30%. The Greens came in at 3% while 1% of respondents said they would vote Liberal.

The Saskatchewan Party led in all regions, with the closest races being in Regina (61% to 35% for the NDP) and Saskatoon (65% to 30% for the NDP). The edge that the SP has in the other rural parts of Saskatchewan is roughly 40 points.

On who would make the best premier, Brad Wall took 69% to Lingenfelter's 24%. 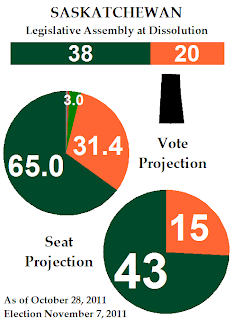 Adding these two polls to the projection, the Saskatchewan Party is now projected to take 65.0% of the vote, with the New Democrats taking 31.4%. The Greens are projected to be at 3% support.

Since the last projection of September 9, this is a gain of 3.3 points for the SP and a gain of 2.9 points for the New Democrats. The Greens are down one point, while the Liberals lose most of the 5.4% of the vote they were projected to have with a full slate of candidates.

The New Democrats have picked up one seat since the last projection in southern Saskatchewan.

For the Saskatchewan election, I've pegged the ranges at including ridings with a projected margin of 7% or less. This 7% is twice the average margin of error at the riding level from the PEI and Manitoba elections, the two I've worked through all the numbers for so far. 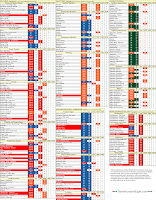 I imagine that we will have some other polls out before the election on November 7, as Sigma and Praxis have yet to report. But it doesn't seem like there will be much divergence in the results heading into next Monday's vote.
Posted by Éric at 12:47:00 PM