McGuinty down to 54 seats, Aylward to 2

Five polls were released over the last 24 hours, four of them for Ontario and one of them for Newfoundland and Labrador.

All four polls in Ontario showed a statistically insignificant gap between the Liberals and the Progressive Conservatives. It's a remarkably close race.

The oldest poll was conducted online by Environics for the Canadian Press between September 26 and 28, interviewing 1,000 people. It found that the Progressive Conservatives stood at 36% to the Liberals' 35%, with the New Democrats trailing at 25% and the Greens at 3%. The poll found the Liberals ahead in Toronto and tied with the PCs in the GTA. The New Democrats were ahead in the north and the Tories in eastern and central Ontario.

The next poll was by Nanos Research for CTV and the Globe and Mail. This telephone poll was conducted on September 28 and 29, and surveyed 600 people. Nanos found the Liberals leading with 37.7% and the Progressive Conservatives trailing with 34.4%. The NDP stood at 25.5% and the Greens at 1.8%. Compared to Nanos's last poll from early September, the Liberals are down 0.4 points and the PCs 0.3 points. The NDP is up 1.2 points, all insignficant.

Then Sun Media released a Léger Marketing poll conducted online on September 28 and 29 and that interviewed 1,012 people. In this poll, the Tories led with 34% to the Liberals' 32%. The New Democrats came in at 29% while the Greens were at 5%. This is a two point drop for the Tories and a one point drop for the Liberals since Léger's mid-September poll, while the NDP picked up three points.

Finally, Angus-Reid and the Toronto Star released a poll this morning. Conducted online between September 28 and 30 and interviewing 1,002 people, Angus-Reid pegs PC support at 34% with the Liberals at 33% and the NDP at 26%. The Greens trail in fourth with 6%. This is a two point drop for the Tories since Angus-Reid's mid-September poll and a one point gain for the Liberals. The NDP are unchanged.

It's a lot of new data. Interestingly, all of the online polls show an insignificantly slim lead for the Tories, while the one telephone poll has a less insignificant (but still within the margin of error) lead for the Liberals. Support for the Tories is very consistent, ranging between 34% and 36%. Liberal support is pegged at being between 32% and 38%, a much wider range that means the difference between winning and losing. NDP support is generally solid, at between 25% and 29%.

In terms of trends, this is Environics's first poll of the campaign so they have nothing to tell us on that score. But the other three all show stability for the two main parties, with changes being comfortably within the margin of error. However, they also all show the Tories slipping a little and two of them have the NDP gaining. Taken together, it would appear that Liberal support is solid, PC support is sliding, and NDP support is on the rise.

Regionally, Environics, Léger, and Angus-Reid all put the Liberals ahead in Toronto and running neck-and-neck with the Tories in the GTA. They all show the PCs leading in eastern, central, and southwestern Ontario, while the NDP is ahead in the Hamilton region. Two of the three have the NDP leading in the north, while the other shows a close race. For the smaller sample sizes that regions have, this is pleasantly consistent. 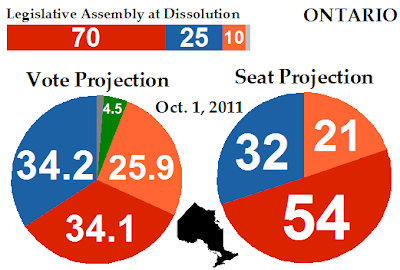 The projection has only moved slightly, however, as these polls have generally fallen on either side of the last set of numbers. The Progressive Conservatives still have a 0.1 point edge (if it can be called that) with 34.2% support. The Liberals follow with 34.1%.

Both parties have dropped 0.4 points since the last projection of September 27.

Only one seat has changed hands, with the Liberals losing it to the New Democrats. This puts the Liberals at a projected 54 seats, the bare minimum for a majority government. With a Liberal Speaker, the legislature would be tied at 53-53 between the government and the opposition.

That opposition is now projected to be made up of 32 Progressive Conservatives and 21 New Democrats.

The one seat that switched hands was in southwestern Ontario. The Liberals are now projected to win 11 in the region, with eight going to the Tories and two to the New Democrats.

At dissolution, the Liberals held 15 seats in the region and the PCs six.

There are enough close races to keep the result up in the air. The Liberals lead in 13 of them and trail in four others, while the PCs lead in four and trail in 10.

This puts the Liberal range at between 41 and 58 seats. The Progressive Conservative range is between 28 and 42 seats.

This means that the Liberals could win anything from a majority to one less seat than the Tories. The odds are still heavily favouring a Liberal government, however.

The New Democrats lead in one close race and trail in four others, meaning they could win between 20 and 25 seats.

One poll from MarketQuest Omnifacts Research was released yesterday for Newfoundland and Labrador, and it was a little controversial.

Taken online and over the telephone between September 28 and 30, the poll of 464 people pegged Progressive Conservative support at 54%, up one point since their last poll earlier in the campaign. The New Democrats were up four points to 33%, while the Liberals fell five points to a woeful 13%.

The controversy erupted when the Liberals questioned the credibility of the poll. But in my experience, when a party starts saying that the numbers in a poll are cooked it is more of a sign that the party itself is cooked. Standard operating procedure is usually to claim that "I don't pay attention to the polls."

Many polling firms employ people with former ties to political parties and governments, and governments are often clients. It's just how it goes, and it seems unlikely that a parent company would sabotage its polling firm's credibility by putting out numbers which can be shown to be false on election day. How easily people are ready to believe that professionals are capable of lying, cheating, and breaking every ethical code in the book for marginal partisan gain is, frankly, depressing. 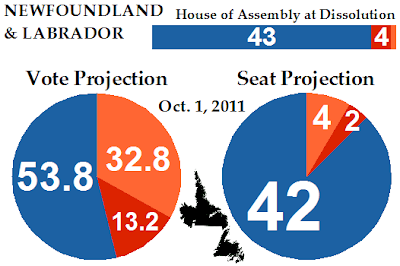 On that cheery note, let's take a look at how this poll has shifted the projection. The Progressive Conservatives are now projected to take 53.8% of the vote, up 0.8 points since the last projection of September 21.

With this shift in support, the Liberals have dropped two seats to the Tories. The Progressive Conservatives are now projected to win 42 seats, with the New Democrats taking four and the Liberals two.

The PC gains come in the regions of the Avalon and Burin Peninsulas and the main part of Newfoundland.

The Progressive Conservatives are now projected to win eight seats in the Avalon and Burin Peninsulas (excluding St. John's), with one seat going to the NDP. In the rest of Newfoundland, the Tories are projected to win 19 seats and the Liberals and NDP one apiece.

In these two regions, the Progressive Conservatives held 27 of the seats at dissolution, while the Liberals held three. That score is still 27 for the PCs, but the Liberals are down to one and the NDP stands at two.

This puts the Progressive Conservative range at between 41 and 43 seats. The New Democrat range is now between four and five seats, while the Liberals are projected to win between one and two seats.

In other words, it appears that the NDP are well positioned to form the Official Opposition.

It should be an exciting week. Prince Edward Island is heading to the polls on Monday, while Manitoba votes on Tuesday. There may be another poll out of Manitoba before that happens. 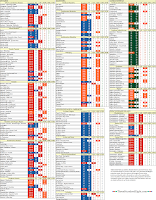 Ontario goes to the polls on Thursday, and I suspect we will hear from every firm at least once before that happens. Newfoundland and Labrador then votes next Tuesday, and I have an inkling we could have three or four more polls out of the province before then. That would be welcome, as we have only heard from MQO Research since the campaign began