Earlier this month, the Vancouver Sun reported on a new poll by Ipsos-Reid on the political situation in British Columbia. We don't often hear from Canada's third largest province when it comes to voting intentions, so despite the poll now being more than three weeks old, let's take a look at it. 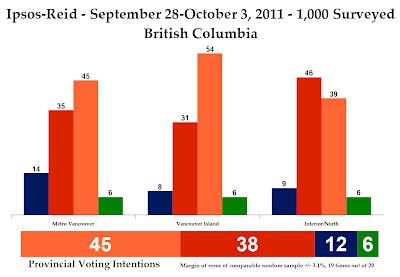 Ipsos-Reid normally does its voting intentions polls by telephone, but does also have an online panel. This poll was conducted using their online panel.

The BC New Democrats led at the end of September and the beginning of October with 45%. The BC Liberals trailed with 38%, the first time in well over a year that the gap between the two parties has been greater than five points.

The BC Conservatives finished third with 12%, while the BC Greens brought up the rear with 6%.

The NDP led in Metro Vancouver with 45% and on Vancouver Island with 54%, while the Liberals were ahead in the Interior and the North with 46%. The gap there was only seven points, while in Metro Vancouver the gap was 10 points and on the island it was 23 points.

But though Adrian Dix's party is leading in the polls, personally he is still behind Premier Christy Clark. She topped the "Best Premier" numbers with 34% support, well ahead of Dix's 23%. That is a personal gap that could be very detrimental to the NDP once an election rolls around - if Dix doesn't narrow it, that is.

The Conservatives are likely to be competitive in a few individual ridings, but at 12% it does not seem very likely that they will elect an MLA. Perhaps their leader, John Cummins, could pull it off, but his hopes were swatted down by Preston Manning recently, who thought that conservatives in British Columiba were better off working through the "coalition" represented by the BC Liberals. 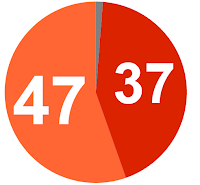 The seat projection model for British Columbia is still in a rudimentary stage, but with these numbers it gives the BC New Democrats 47 seats and a majority government. The BC Liberals win 37 seats, while one independent is elected.

Clark has said she will hold off until 2013 before calling the next election, so there is still plenty of time for things to change in the province. But it still looks like it is going to be a very close race, just like it has been in the two previous elections in British Columbia. One can't help but wonder, however, whether the BC Liberals would be comfortably ahead if the BC Conservatives were not on the scene. Clark will have to fight a two-front battle if the Conservatives continue to poll in the double-digits.
Posted by Éric at 10:25:00 AM