On Tuesday, Newfoundland and Labrador voters are expected to give the Progressive Conservatives their third consecutive mandate since 2003 – and a first under the leadership of Premier Kathy Dunderdale. While there is little doubt about the make-up of the next government in Newfoundland and Labrador, how the opposition parties will fare is the big question heading into election day.

For the first time in their history, Newfoundland New Democrats are running second in the polls and are on track to form the Official Opposition. The Liberals, who have governed the province for most of its post-Confederation history, are a distant third but may have enough pockets of strength in the rural parts of the island to come out ahead of Lorraine Michael’s NDP.

You can read the rest of the article on The Globe and Mail website here. Complete details of the new projection can be found in the article.

The last two polls of the campaign in Newfoundland and Labrador, from Environics and Corporate Research Associates, show very little change from what MQO Research and NTV/Telelink have found to be the case. In short, the Tories are still well ahead, the New Democrats have a lock on second, and the Liberals are floundering below 20% support.

It's the regional data that is interesting. Environics has NDP and PC support at 47% apiece in St. John's, with the Liberals trailing at 6%. From my estimates of what was gleaned from The Telegram's reports, CRA has support for the PCs at 60% in St. John's, with the NDP at 31% and the Liberals at 9%. Those would, of course, have very different outcomes on election night. 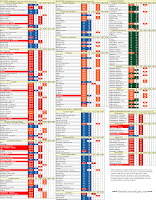 So, what this breaks down to is the Tories dominating everywhere, but that the NDP and Liberals have enough pockets of support to be competitive in several ridings. Where those seats will be will be interesting to watch on Tuesday night.

I don't expect any new numbers to come out, but I will post the final projection for Newfoundland and Labrador on Tuesday morning.
Posted by Éric at 12:33:00 AM