Prince Edward Islanders head to the polls today in the first of five provincial elections slated for the fall. ThreeHundredEight.com projects that the Liberals under Robert Ghiz will win a majority government, with Olive Crane's Progressive Conservatives forming the Official Opposition. 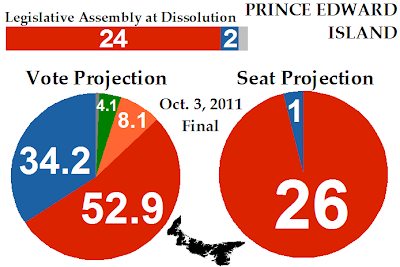 The Progressive Conservatives are projected to win their one seat in the eastern part of the province. The Liberals take all of the rest.

Only two polls were released during the campaign, with another being released just before the campaign began.

The polls showed little movement, particularly when considering the large margin of error. The Liberals started the campaign at 59% support and dropped to 53%, while the Tories ranged between 31% and 36%. Where the New Democrats end up is disputed: the Corporate Research Associates pegged their support at 5% while MQO Research put them at 12%. 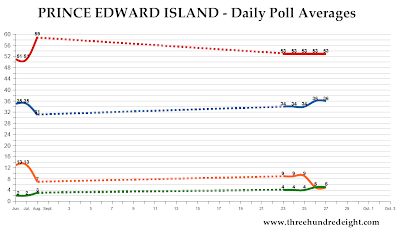 The above chart boils down the final projection. Only one riding is projected to be close, putting the Liberal range at between 25 and 26 seats and the Progressive Conservative range at between one and two seats. 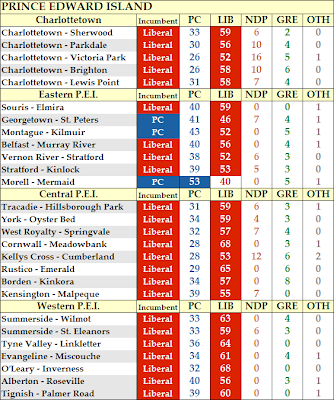 However, Prince Edward Island is a tiny province with even tinier ridings. There is a lot of potential for several surprises as only a few hundred votes need to swing one way or the other in virtually every riding in order to change hands. Being such a small province, the difficulty in projecting the result is compounded.

If we take into account the margin of error in the 2011 federal campaign's projection (with accurate vote results, that is), the potential exists for the Liberals to win as few as 23 seats and as many as 27. The Tories could win between zero and four. But it is unlikely that all of the errors would swing in one direction.

But what if the polls have it wrong? The 2007 provincial election was polled relatively well. Even the degree of polling error in the 2011 federal election isn't enough to change the race in Prince Edward Island dramatically.

The above chart adjusts the projection by the degree of polling error in the 2007 provincial and 2011 federal campaigns. For example, the Conservatives averaged 37.4% in the final polls of the 2011 federal campaign, and ended up getting 39.6%. This would mean an adjustment of PC support by a factor of 1.059. After making the adjustments, the vote projection is then smoothed out to add up to 100%.

If the polls are off in the same way as they were in 2007 (though it is, of course, unlikely that the same error would be reproduced exactly), the Liberals should take 55.6% of the vote to the Tories' 34.9%. This would not change the projection: 26 Liberal and one Progressive Conservative seat.

If the polls are off in the same way as they were in the 2011 federal campaign, the Liberals should take 52% of the vote and the Tories 36.2%. Again, that does not change the projection but does increase the likelihood of the PCs taking an extra seat.

But, in the end, the only question heading into tonight's vote in Prince Edward Island is how large the Progressive Conservative opposition will be. The potential for a Liberal sweep of all 27 ridings exists, but I consider it unlikely. The need to have some opposition in the legislature is an advantage to Olive Crane, and the final poll of the campaign indicated that support in Kings County was neck-and-neck between the Liberals and the Tories. Whether the PCs win one or two seats will likely be decided here, but a Liberal majority is inevitable.
Posted by Éric at 9:10:00 AM