Prince Edward Island and Manitoba were appetizers to what is the main course of this election season: the provincial election in Ontario. ThreeHundredEight projects that the Liberals under Dalton McGuinty will win their third consecutive majority government, with Tim Hudak's Progressive Conservatives forming the Official Opposition. The New Democrats under Andrea Horwath will be the third party in the Ontario legislature.

The projection has changed since the last update, as Angus-Reid and Forum Research released some new data. They made it a consensus - the Liberals lead in every final poll of the campaign, but the size of that lead stands at anywhere from one point to as much as 10. Either way, the Liberals should be re-elected with a majority. Even Forum's numbers point to a slim two-seat majority for them.

UPDATE: EKOS ruined my night by posting their final numbers a little before 11 PM. I've updated everything (again) with these new numbers, but it changes little.

Before the successful projection of the Manitoba election, the volatility and uncertainty indicated by the polls would have left me ill at ease going into the Ontario vote. I don't know how the polls will perform tomorrow, but I am confident that if the polls do well the projection model should also do well. Of course, the 2011 Ontario might be one of those enigmatic elections, like the one in 1990 that left everyone surprised. 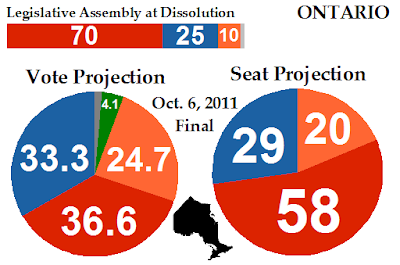 ThreeHundredEight's aggregation of the polls gives the Liberals a 3.3-point lead over the Tories. The Liberals are projected to take 36.6% of the vote, with the Progressive Conservatives taking 33.3% and the New Democrats 24.7%. The Greens come in fourth with 4.1% of the vote.

The Liberals are projected to win 58 seats, with 29 being won by the Tories and 20 by the New Democrats.

The New Democrats win seven seats in northern Ontario, six in Toronto, four in the Hamilton/Niagara region, and one each in Ottawa, Greater Toronto, and southwestern Ontario.

When the campaign began, there were about 30 races which were projected to be 'close'. That has dropped to about a dozen.

The Liberals lead in seven close races and trail in four, putting their likely seat range at between 51 and 62 seats. In other words, the possibility for a Liberal minority still exists.

The Progressive Conservatives lead in four close races and trail in six, putting their likely seat range at between 25 and 35 seats.

The New Democrats are leading in one close race and trailing in two, putting their likely seat range at between 19 and 22 seats. Note that the NDP won 10 seats in the 2007 election.

But with the last month's worth of polling, one can't help but feel like anything could happen on election night. Ontarians have been some of the most difficult voters to call in the last three federal elections. Will they fall in line as they did in 2007, when the polls were within 1% of the PC and Liberal results? 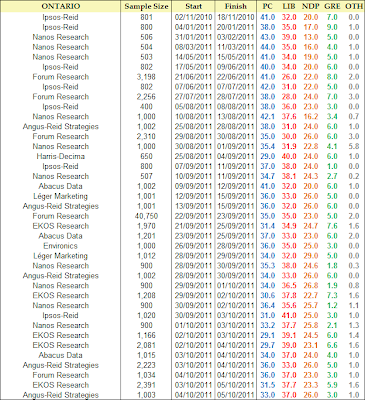 A lot of polls were released in this campaign. Twelve were taken in the five first days of October alone. In the 26 polls released since September 1, the gap between the Tories and the Liberals has been three points or less in 12. It has been an amazingly close race, and only in the final week has it really become clearer who is ahead. 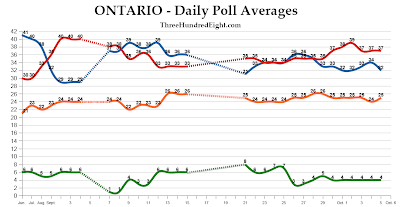 And that party is, of course, the Liberals. They took the lead on September 29, two days after the debate, and have never looked back. The gap has narrowed in the last few days, but the Liberal lead is larger than any the Tories had during the campaign, except on one day.

Generally speaking, though, the campaign has moved very little. The New Democrats have been steady at around 23% to 26% since Day 1. The Greens have faltered, though, dropping to about 3% or 4% about the same time as the leaders' debate took place. One wonders if the presence of Mike Schreiner in the debate would have changed anything.

As with the PEI and Manitoba elections, though in neither case did the same kind of error repeat itself, let's take a look at some other possible scenarios if the polls are inaccurate in the same ways as they were in the 2007 provincial and 2011 federal elections. 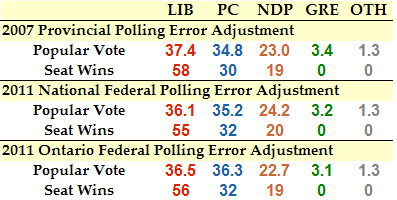 In the 2007 provincial race, the polls were quite accurate, and there would be little change in the projection. The only difference is that the New Democrats take a little less of the vote, giving the PCs one more seat.

If the polls are wrong in the same way as they were at the national federal level in the May election, the Liberals would win the bare minimum of a majority government.

But what if the polls repeat the same error that happened in the federal election in Ontario? Here, the Conservative vote was greatly underestimated. However, the Liberal vote was about right. So what we have in that situation is the Liberals and Tories tied at a little more than 36% and the NDP below 23%. This results, again, in a Liberal majority. Indeed, the Liberals are the beneficiary of a greater drop in NDP support.

More so than probably any other province, Ontario has a great degree of political regionalization. Unfortunately, the model was unable to take that into account due to the lack of uniformity in how the pollsters break down their polls. This could be a problem when the votes are counted, but I don't think it will be. If the polls have this one right, and even if they are off by a little, Ontario will elect a slim Liberal majority government on Thursday night. But if this campaign has taught us anything, it is to expect nothing.