Tonight, Newfoundlanders and Labradorians will give the Progressive Conservatives of Kathy Dunderdale a majority government. That much is absolutely assured. Who will sit across from the premier in the House of Assembly, however, is not so certain. But ThreeHundredEight.com projects that Lorraine Michael's New Democrats will form the Official Opposition, while Kevin Aylward's Liberals will be the third party in the legislature. 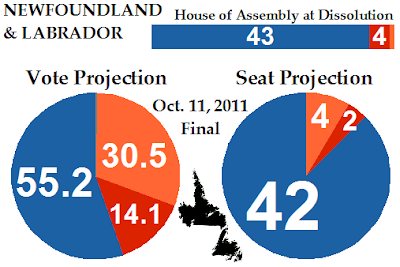 Based on an aggregation of the campaign's polls, the Progressive Conservatives are projected to take 55.2% of the vote tonight, with the New Democrats taking 30.5% and the Liberals 14.1%.

This represents a historic high for the NL NDP and a historic low for the Liberals.

The Progressive Conservatives are projected to win 42 seats, with four going to the NDP and two to the Liberals.

The Progressive Conservatives are projected to win 19 seats on the main part of Newfoundland, 13 in the St. John's region, eight on the Avalon and Burin peninsulas, and two in Labrador.

The New Democrats are projected to win one seat in each region, while the Liberals win one in Labrador and one in rural Newfoundland.

Because of the smaller sizes of the ridings and the unpredictable nature of the NDP's rise, I've increased the "close races" margin to 10%. The Tories lead in two such close races, and trail in two. This gives them a seat range of between 40 and 44 seats. The Liberals and NDP lead and trail in one seat apiece, putting their range at 3-5 for the NDP and 1-3 for the Liberals. 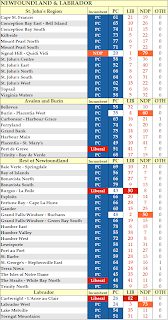 But I wanted to do something else a little different this time. The elections in all three provinces so far this fall have shown that, while the polls have done generally well, they've had a little difficulty pinning down the difference between eligible voters and actual voters.

Though I plan to investigate whether a model to determine this difference is necessary, in the meantime there are other options. Some pollsters report both decided and decided + leaners results. Others, like EKOS in the Ontario election, reported the results for eligible but also most likely voters. For EKOS, their estimate of the support of likely voters was closer to the mark and put them on par with other firms like Nanos and Angus-Reid.

Luckily, the last three polls of the Newfoundland and Labrador campaign reported their numbers for decided voters, in addition to their decided and leaning results. If we take these last polls and change them to only their decided results, the projection changes.

Though I will stick with the projection based on eligible voters for continuity, I think this may be a likely outcome. In future elections, I will either determine how to chart the difference between polls and results, or I will simply use these kinds of results (decided only, certain to vote, likely voters, etc.).

In this projection, the Progressive Conservatives take 57.5% of the vote, with the New Democrats taking 28.3% and the Liberals 14.1%. This is a difference of about two points extra for the Tories, taken from the NDP.

The seat projection changes to 43 for the Tories, three for the NDP, and two for the Liberals.

The seat range becomes 41-44 for the Progressive Conservatives, 3-4 for the NDP, and 1-3 for the Liberals.

The polls released during this campaign (five in all) don't point to any major problems in assessing the popular vote. The Tories have gotten between 51% and 59% in every poll. That is a big spread, but they all mean a big PC majority.

Results for the New Democrats have been as consistent, ranging between 27% and 35%. This is a bit more important, as at the higher end of the scale the NDP is in a good position to win more than a couple seats in St. John's. At the bottom end of that scale, the NDP will come up short.

Liberal results have been most consistent, at between 13% and 18%. They have not been close to the NDP in any poll since the campaign began, indicating it is highly unlikely they will come up second in the popular vote. 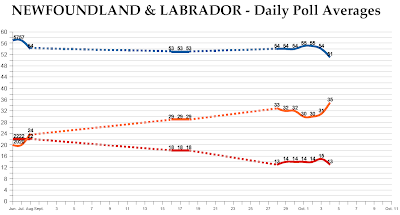 But that doesn't make it impossible. A full week has passed between today and the last poll. There was enough consistency during the campaign to suggest we should expect little movement in the final week, but seven days is a long time in a campaign. During the 2005-2006 federal campaign, the Conservatives took off during the holidays. One of the theories is that people got together during the holidays and discusssed politics enough to shift the vote. These last seven days include Thanksgiving, so there is the potential for this kind of shift.

There are also the factors of motivation and organization. The Liberals are generally said to be not well organized and, considering how the campaign has gone, they can't be very motivated. The Tories are well-organized but their voters might not be motivated to vote in an election the results of which are considered a foregone conclusion. How will the NDP's organization perform, and will their voters be motivated with the history-making opportunity that tonight's vote represents?

In terms of the projection itself, there is a lot of potential for ridings to buck provincial trends. Ridings in Newfoundland and Labrador aren't very large, and many parts of the province are quite isolated. Incumbents might be difficult to defeat, incumbents unpopular with the locals may not be able to hold on. A few specific oddities from the 2007 election (one MHA won by acclamation, another candidate died and thereby forced a special election, the lack of NDP candidates compared to a full slate this time around) could also cause the projection to be skewed. So, there could be a lot of surprises in store for us tonight.

But the one thing we know for certain (well, 99.99% certain) is that Kathy Dunderdale will win the election and take a majority of the legislature's seats. How NDP and Liberal voters behave, however, will determine who forms the Official Opposition. The polls point to the NDP, but voting intentions do not always turn into votes, and performing well in polls is not the same as winning seats. We'll find out soon.
Posted by Éric at 9:02:00 AM