Liberals up in Ontario, but outcome still uncertain

Before getting to what will likely be the last Ontario projection of the campaign, a few words about last night's election in Manitoba.

The polls nailed it. Angus-Reid and Probe Research put out the last polls of the campaign and both agreed that the NDP had 46% support and the Tories 43%. They put Liberal support at between 7% and 8%.

With this boost of confidence, I can now look to the Ontario election. But it is going to be trickier, because two polls released at the end of the day yesterday ruined the consensus that was building.

Nanos Research set the stage, saying that though they pegged the gap at about five points from October 1 to 3, the last two days of polling showed the Liberals over 40% support and well on their way to a majority.

EKOS Research, in a poll put out yesterday morning, agreed, with the Liberals at 39.1% support to the PCs' 29.1%. A poll they released this morning through iPolitics, with extra data from yesterday, corrobated their findings. Their IVR poll taken from October 2 to 4 and surveying 2,081 people has the Liberals at 39%, the Tories at 29.7%, and the New Democrats at 23%. In what EKOS considers likely voters, the Liberals still lead with 40% to 32% for the Tories and 21% for the NDP.

Ipsos-Reid then sealed it with a poll for the Ottawa Citizen, giving the Liberals a 10-point lead. In a telephone poll taken between September 30 and October 3 and surveying 1,020 people, Ipsos-Reid found Liberal support standing at 41%, with the Tories trailing with 31% and the NDP with 25%. Considering that Ipsos-Reid has generally put Conservative support higher than most other polling firms (to, perhaps, their credit), this kind of lead for the Liberals was doubly important.

Ipsos-Reid also found that Dalton McGuinty was the preference to be premier at 37% to 27% for Tim Hudak, and gave the Liberals a 10 point lead among those aged 55 or older, the people in Ontario most likely to vote.

Then Abacus Data came along and muddied the waters in a poll for Sun Media. In an online poll of 1,015 Ontarians taken between October 3 and 4, the Liberals led with 37% to the Tories' 34%. A lead, but nowhere near as comfortable as Nanos, Ipsos-Reid, and EKOS found to be the case. The New Democrats came in third with 24%.

Abacus gave the leadership edge to McGuinty, with 30% to Hudak's 21%.

Finally, this morning Angus-Reid in a poll for the Toronto Star completely demolished the consensus of a Liberal lead. In an online poll taken between October 3 and 4 and interviewing 2,223 people, Angus-Reid pegged Progressive Conservative support at 36%, with the Liberals trailing at 33% and the NDP at 26%.

Perhaps significantly, though, Angus-Reid had McGuinty at 24% on who would be the best person to be premier, slightly ahead of Hudak (23%).

So what to make of this? We aren't talking margin-of-error issues at this point. Some of the pollsters will have egg on their face on Thursday night. One might consider Angus-Reid the outlier, but they nailed the Manitoba election and their data is newer than that of Nanos and Ipsos-Reid, and partly that of EKOS. It's also the largest poll in this last week. Perhaps it is a methodological issue, as the online polls are showing more favouable results for the Tories than those done over the telephone. Angus-Reid shows the Tories gaining, everyone else has them falling.

There are a few points of consensus, however. Dalton McGuinty is beating Tim Hudak on the all important leadership question, while regionally the Liberals are dominating in Toronto and the NDP is good in the north. Outside of these two regions, there is no consensus but it should be pointed out that in only one poll do the Tories have the kind of lead they need in the GTA to make a run at the premiership. 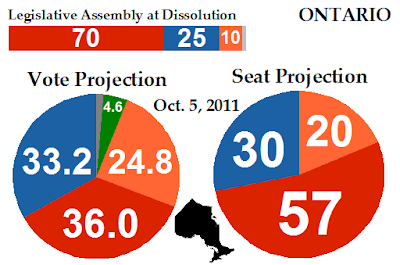 So, with all of these conflicting numbers the projection is falling, as it should, somewhere in the middle. The Liberals are projected to take 36% of the vote, with the Progressive Conservatives netting 33.2% and the NDP 24.8%. The Greens take 4.6% of the vote.

The Liberals have picked up one seat, and are now projected to win 57. The Progressive Conservatives are unchanged at 30, while the New Democrats are down one to 20 seats.

The seat change is in the southwest, where the Liberals are now projected to win 13 seats, the Tories seven, and the New Democrats one.

There are still a number of close races, but not enough to put the Tories in range of even a minority government.

The Liberals lead in six close races and trail in four, putting their seat range at between 51 and 61 seats. Only 30% of their range is in minority territory.

The Progressive Conservatives lead in four close races and trail in five, putting their range at between 26 and 35 seats. They are no longer in danger of being supplanted by the NDP, as was starting to look like a possibility yesterday.

The New Democrats lead in one close race and trail in two, putting their range at between 19 and 22 seats. 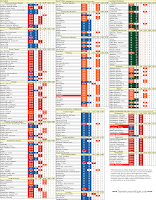 But with the polls as confusing as they are, Thursday night is far from a sure bet. The Liberals were clearly going to win PEI and the electoral geography of Manitoba pointed to an NDP victory.

Tomorrow's final projection report will also make mention of the poll error adjustments I have done for Manitoba and PEI. In addition, though, I will put up projections for the kind of lead that Nanos, Ipsos, and EKOS are showing, as well as the result that Angus-Reid predicts. It will be a long night, and anything could still happen. But even the Tory lead in the Angus-Reid poll is not large enough to give the PCs much hope - which means we're looking at a Liberal re-election.
Posted by Éric at 11:22:00 AM