With hours to go before the polls close in Manitoba, ThreeHundredEight.com projects that Greg Selinger's New Democrats will win a majority government, with Hugh McFadyen's Progressive Conservatives forming the Official Opposition. Jon Gerrard's Liberals will be the third party in the Manitoba legislature.

This comes after the addition of Angus-Reid's Manitoba poll released yesterday, conducted between September 30 and October 2, and surveying 800 people online. The poll was identical to Probe Research's numbers, with the New Democrats at 46% and the Progressive Conservatives at 43%.

This is a margin that, however, makes me quite uncomfortable, particularly in light of yesterday's results in Prince Edward Island. 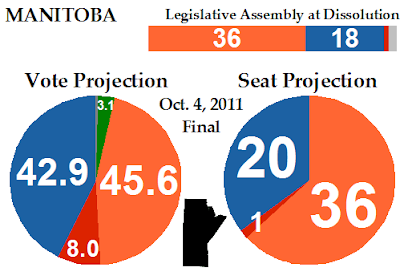 The New Democrats are projected to take 45.6% of tonight's vote, with the Progressive Conservatives taking 42.9%.

The Liberals are projected to take 8% of the vote, while the Greens take 3.1%.

That is, in any case, what the polls are suggesting.

Since the projection of September 30, this is a gain of 0.9 points for the New Democrats. The Tories and Greens have each lost 0.4 points, while the Liberals are down 0.1.

The New Democrats are projected to win 36 seats, with the Progressive Conservatives winning 20 and the Liberals one.

Four polls were released in this campaign, all in the last two weeks. Only one of them showed a Tory lead, while the last three all put the margin between the NDP and the PCs at three points, inside the margin of error. 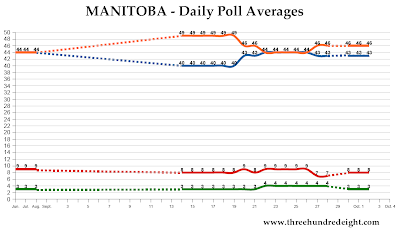 Averaged out, however, the New Democrats have been tied or have led the Tories for the entirety of the campaign. But the race remains incredibly close, and dangerously close for a projection.

The New Democrats are leading in one close race and trailing in two others, all implicating the Tories. This puts the New Democrat range at between 35 and 38 seats, and the Tories between 18 and 21 seats.

I suspect, however, that more races will be quite close.

But it should not be forgotten that projections are not a crystal ball looking into the future - they are based on the available polling data, which currently shows an NDP lead.

Though the ridings in Manitoba are larger than that of Prince Edward Island, they are still small and local factors will undoubtedly skew some of the riding projections. Also problematic is that the boundaries have changed, and this has the potential to greatly change how voters behave. For many voters, their "incumbent" ran in a different riding in the 2007 election, so there is a good chance that there will be a few surprises tonight.

Adjusting the projection for the polling error in the 2007 Manitoba and 2011 federal elections, however, changes little in the outcome.

If the error is the same as it was in the 2007 provincial campaign, the New Democrats should take closer to 49% of the vote and win 37 ridings.

But if the error is the same as it was in the 2011 federal campaign, and as we have seen in many cases the Conservative vote is often under-estimated, the Tories would win more of the popular vote - but only just. The projection model would still give the NDP 36 seats to the Tories' 20, but the PC range would be extended to as many as 26 seats, with the New Democrats taking the 31 others.

If we use the riding projection accuracy rating of last night's projection, we could expect as many as eight ridings to be called incorrectly tonight. That is a potentially significant number. If the projection tonight is as accurate as last night's, the New Democrats could win between 28 and 44 seats and the Progressive Conservatives between 12 and 28 seats. In other words, the legislature could be split down the middle at 28 seats apiece for the NDP and the Tories.

If the polls have it, though, the edge the New Democrats have in Winnipeg (roughly 20 points) should be the clincher. The city contains 54% of the province's ridings, and the New Democrats are strong enough in the north, Brandon, and a few other rural pockets to make up for any Winnipeg ridings that side with the Progressive Conservatives.

But the outcome is far from pre-determined. With the margins of error of the polls, the Tories could actually come out with more votes. And if the changes in riding boundaries has a particular effect, they could come out with more seats as well. I suspect it could be a long night in Manitoba, as it will be for myself here in Ottawa.
Posted by Éric at 10:55:00 AM