In the next few days, a decision Stephen Harper would prefer not to make will be announced.
At stake: $35 billion and as many as 10,000 jobs.

Canada's navy is in need of a refit, and two shipbuilding contracts worth $35 billion will be awarded to two of three Canadian shipyards that have tendered bids.

One of them, the most likely to win the largest of the contracts, is in Halifax. The other two are in Vancouver and Lévis, across the St. Lawrence River from Quebec City.

The potential political fallout from the decision could be catastrophic...

Of course, the merits of the three bids are certainly to be a major, if not the major, factor in making the decision. Whether or not politics will play a role in decision-making, the decision will have political repercussions.

One of the polls I mention in this article is the Léger Marketing poll released yesterday by Le Devoir. The poll indicates that very little has changed in Quebec since May 2nd. 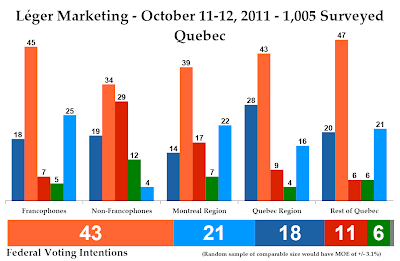 The New Democrats still lead in Quebec with 43%, well ahead of the Bloc Québécois at 21% and the Conservatives at 18%.

The Liberals trail far behind at 11%, with the Greens at 6%.

Compared to Léger's last poll in September, there have been no significant changes.

In the sub-samples, however, there have been two shifts worth mentioning.

The last full breakdown of the regional and linguistic numbers we have from Léger dates from June, and since then the voting intentions by language have moved.

Among francophones, the Conservatives have picked up six points and stand at 18%, within striking distance of the Bloc's 25%. The Liberals have dropped to only 7% support among francophones, who make up 80% of the population.

Among non-francophones, the Liberals are back. The New Democrats are down 13 points since that June poll in this demographic, leading by 34% to the Liberals' 29%, up 12. This is a very different result from June, when it looked like the non-francophone community had gone en masse for the NDP, leaving the Liberals in the lurch and putting the Conservatives in a position to win some seats on the island of Montreal. It appears, however, that the NDP is losing some support among non-francophones, which perhaps comes as little surprise as the NDP begins to speak out more about Quebec's interests.

The NDP still has a comfortable lead in Montreal, Quebec City, and the rest of Quebec. The Bloc trails by a wide margin in both Montreal and the regions, while the Conservatives are 15 points behind the NDP in the Quebec City. In the context of the shipbuilding contracts, this is important.

Of course, the NDP's support at this stage is as interim as Nycole Turmel's leadership. Once the new leader is chosen we will see what the NDP's future in the province will be. The choice of the Bloc's next leader is unlikely to have a big effect, but I wouldn't be surprised to see a bump in their favour in December and January after the leadership convention when the Bloc will be back in the news for a little while. It is possible, though, that the Bloc could ride that tiny bump for some time if the choice of the leader of the NDP does not jive with Quebecers.

But things are in stasis in Quebec. Between now and 2015, the NDP leadership convention and the next Quebec provincial election will take place. Both these events will shake things up in Quebec to a great degree, so this is all pre-season jockeying before the real games begin.
Posted by Éric at 8:44:00 AM