PQ and BQ drifting away in Quebec

Over the weekend, La Presse released the latest poll numbers from CROP. And they are pretty disastrous for the two main sovereigntist parties in the province. Let's take a look at the provincial numbers before moving on to the federal situation. 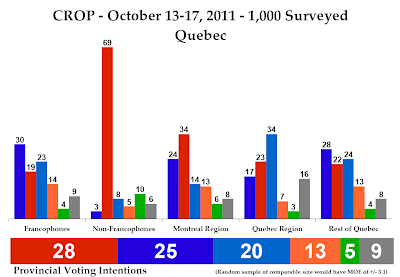 Jean Charest's Liberals are leading in the province with 28%, if such a low level of support can really be called leading. The Parti Québécois follows with 25%, while the ADQ is staging a come-back at 20% support.

This is unchanged from CROP's last poll in mid-September for the Liberals, but represents a three point drop for the PQ and a two point gain for the ADQ.

Québec Solidaire is up two points to 13%, while the Greens are down two to 5%.

None of these shifts are very significant, but we've seen the PQ dropping and the ADQ gaining elsewhere, so that does seem to be a trend.

"Other" support, otherwise known as pesky CAQ supporters who aren't answering the question correctly, stands at 9%. If we remove all but 1% of that and distribute it proportionately, we get the Liberals bumped up to 30%, the PQ up to 27%, the ADQ up to 22%, and QS up to 14%.

Taking out the Legault effect completely, in other words, creates a very odd situation in the province. So, this isn't just the by-product of Legault's CAQ muddying the waters - no existing party is capturing the support of one in three Quebecers.

The Liberals are leading in Montreal and among non-francophones, having picked up four points apiece in those demographics since mid-September. The Parti Québécois leads among francophones and in the regions of Quebec, while the ADQ is ahead in Quebec City. Generally par for the course.

What is interesting is that support for sovereignty still stands at 37%, or generally where it usually is at the low-end of the scale. That lines up nicely with the 38% of Quebecers who opted for the PQ and QS in this poll.

But the numbers on who would make the best premier are simply a sign of how Quebecers have completely rejected what the province's politicians have to offer. Only 14% said Jean Charest was the best person for the job, and it was enough to put him ahead of Pauline Marois (10%) and Amir Khadir (8%). Fully 34% said none-of-the-above. 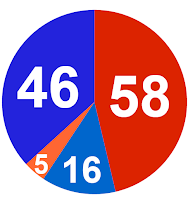 With these numbers, the Liberals would win a minority govermment with 58 seats, with the Parti Québécois forming the Official Opposition with 46 seats. Charest would be able to turn to Québec Solidaire (five seats) or the ADQ (16 seats) to get legislation passed, if they can't agree with the PQ on individual issues.

But in addition to the emergence of the CAQ and potentially another sovereigntist party, the National Assembly is full of independents formally from the PQ, the ADQ, and even the PLQ. If they all run again - as independents - this would result in 59 seats for the Liberals, 41 for the Parti Québécois, 18 for the ADQ, six for QS, and one independent.

If the CAQ is added to the mix, it demolishes the other parties with 39% support to 22% for the Liberals, 17% for the PQ, and 11% for the ADQ. That could be enough to give them 102 seats, with the Liberals taking 15 and the remaining eight seats being divvied up between the PQ, ADQ, and QS. But, as I've said before, the Quebec model that includes the CAQ needs a little more tweaking. 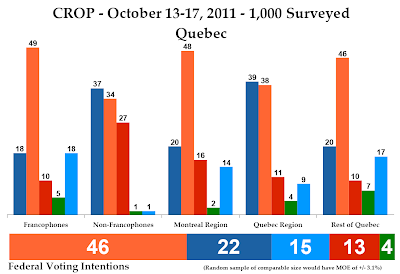 Federally, the Bloc Québécois is also struggling. It has dropped two points to 15% and stands in third place, well behind the Conservatives at 22% (up three) and way behind the New Democrats, who still lead with a massive 46% support.

The New Democrats lead among francophones, in Montreal, and in the regions of Quebec.

The Conservatives lead in Quebec City and - perhaps very importantly - among non-francophones as well. It's a three-way race for Montreal's anglophones and allophones, with the Tories having the edge. If this kind of support held in an election, we'd see a hodge-podge of red, orange, and royal blue in the centre and west end of the island of Montreal.

The Bloc's numbers in this poll are simply dismal. In Montreal and Quebec City they are fourth and in the regions of Quebec they are third, and are not even ahead of the Tories among francophones. They desperately need something to move their numbers, and it doesn't look like any of the three relatively little-known candidates for the party's leadership are going to suddenly change the game in Quebec.

And that is significant, because with these levels of support the Bloc's four surviving MPs would be defeated. The New Democrats would take 60 seats in the province, with 10 going to the Conservatives and five to the Liberals.

The New Democrats do seem to be safely ensconced in the province. On the leadership question, Stephen Harper (the only actual full-time leader) tops the list with 20% saying he is the best person to be Prime Minister. But Nycole Turmel, the NDP's interim leader, is only at 12% despite the NDP leading in the province and the interim leader being the only one that is a francophone Quebecer. Quebecers seem pretty pleased with the NDP itself. It will be fascinating to see how these numbers move, if at all, when the next leader is chosen.

Quebec is the province to watch for the next couple of years. Provincially, the coming of the CAQ is throwing everything out of whack, while the PQ could go through some leadership issues and QS is looking to make a splash in the province. Federally, the NDP's dominance continues but the next leader of the NDP could change things in Quebec, which is increasingly looking like an NDP-CPC race. But will the Bloc manage to somehow become a factor again? Could the next leader of the Liberals be from the province, and if so, what will that mean?

It's a very interesting time to be watching politics in Quebec, and it could very well capture our attention all the way to 2015.
Posted by Éric at 9:23:00 AM