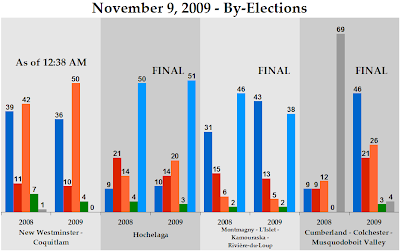 00:37 - It is getting too late to wait for the last eight polls in New Westminster-Coquitlam, so I'm calling it now. It will be kept for the NDP, and Fin Donnelly will become the newest NDP MP. They're back up to 37 in the House of Commons. This race turned out to be far less close than everyone assumed. As of writing, the NDP is at 50% followed by the Tories at 36%, the Liberals at 10%, and the Greens at 4%. But the voting turnout was low, about 30%. The Liberals did as well as they did last year, but that is not exactly a positive thing considering British Columbia appears to be one of the regions they can make some gains. The Conservatives saw a slight dip, which fits in with how they're doing in the province. But the NDP gain of almost ten points is very significant. I would not be surprised if we see an NDP bump in the polls in British Columbia soon.

That does it for tonight. Good night!

00:20 - So, the Conservatives pull off the only upset tonight, taking Montmagny-L'Islet-Kamouraska-Rivière-du-Loup from the Bloc. But, remember, this is right next to the Tory block of seats in and around Quebec City, so this doesn't represent a breakthrough into a new region of the province. It does show, however, that the Conservative brand is still a winner in this part of Quebec. That certainly bodes well for the future. The Tories were written off in Quebec only a few months ago, they're now back in it. They take the riding with 43%, 12-points more than the election. The Bloc drops eight points to 38%, while the Liberals drop two to 13% and the NDP drops one to 5%. These two parties really weren't in the race. But then again, they weren't in the race last year either. Turnout was 37%, as good as anywhere else, showing that "voter fatigue" doesn't really exist if something is at stake.

00:14 - So, all the polls from Hochelaga are now in. Daniel Paillé will be the next Bloc MP, putting them up to 48 total in the House of Commons. He won pretty easily with 51%. The NDP finished a strong second with 20%. The Liberals were behind with 14%, and the Conservatives were at 10%. The only real movement was between the Liberals and the NDP, and the NDP seems to have taken about 1/3 of Liberal voters in the riding. The turnout was only 22%, very low. That's usually the case when the result is a foregone conclusion.

23:41 - Donnelly still leads, now by 1,800 votes. With 110 out of 225 polls reporting, that looks like the NDP will hold on to the seat. Apparently, people in the riding were aware of the race between the CPC and the NDP, as the Liberals had only 9% support. The Conservatives lead in Montmagny with 1,100 votes. With only 17 polls left, this looks like a Tory pick-up. Two more seats for them, putting them up to 145. The Bloc will be at 48 and the NDP will be at 37 tomorrow.

23:18 - So, the gap is starting to narrow between the Conservatives and the NDP in NWC, but Fin Donnelly still holds an 800-vote lead over Diana Dilworth. In MLKRDP, Généreux is up to about a 900-vote lead, with 220 out of 257 polls reporting. Unless the remaining polling boxes are from Bloc-friendly parts of the riding, this just might be the night's upset. But, as I explained before, this riding does fit the profile of a Conservative Quebec riding, so I wouldn't call this a "game changer".

23:05 - Cumberland-Colchester-Musquodoboit Valley is settled. Scott Armstrong will be the new Conservative MP for the riding. He earned 46% of the vote, followed by the NDP at 26%, the Liberals at 21%, and the Greens at 3%. The Christian Heritage Party managed 776 votes and 3% as well. The turnout was 36%, not horrible for a by-election. This result is good for the Tories, obviously. The NDP can be happy with placing second, but they had built it up to be a little more of a race than it was. The Liberals should be disappointed considering Atlantic Canada is one of their better regions, but 21% isn't disastrous.

Bernard Généreux has opened up a 450 vote lead on Bloc candidate Nancy Gagnon, 42% to 39%, in Montmagny.

22:18 - Still nothing from British Columbia, but the Bloc is doing better in Hochelaga and are up to 52% with 50 of 219 polls reporting. The NDP's vote increase isn't exactly significant, neither is the Liberal drop, for a by-election.

In Montmagny, it is still a dead-heat, 40% apiece, with 100 of 257 polls reporting. Neither the Liberals nor the NDP have moved much at all.

In Nova Scotia, the Tories got about 54% of Casey's vote, compared to 20% for the NDP and 17% for the Liberals. While the NDP is doing well to be in second, the Liberals aren't as out of it as everyone assumed they'd be.

New Westminster is still up in the air, but Montmagny is turning out to be the race to watch.

In Nova Scotia, the Conservatives have re-earned the Casey vote. They lead the NDP 46% to 26%. The Liberals are at 21%.

The race is very close in Montmagny, tied at 39% as of right now. The Liberals maintained their vote, however.

No results from British Columbia, which isn't a surprise, considering the polls just closed.
Posted by Éric at 5:03:00 PM