EKOS has their latest poll out. It is a big one, as they promised, but it doesn't reveal all that much in terms of change. 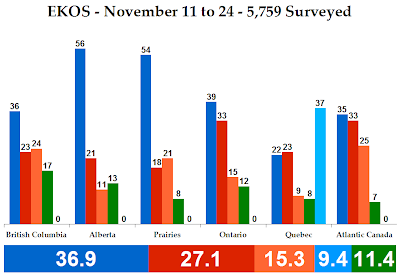 This represents a 0.3-point gain for the Conservatives from EKOS's last poll (November 4 to November 10). The Liberals, however, are also up, by 0.5 points. The Greens are up 0.2 points and the Bloc is up 0.6 points (nationally). In contrast to some other polls we've seen, it is the NDP that takes the hit here - a full 1.5 points.

The Conservatives had a big gain of 10 points in the Prairies, and are now well ahead. Their Alberta and British Columbia results are still lower than they need to be, while they are still riding high in Atlantic Canada. Their Ontario and Quebec results are close to their 2008 electoral result.

The Liberals had a gain of 3 points in Alberta, but aside from that there isn't much to be happy about. Their BC and Prairie results are alright, the Ontario one isn't horrible, but it is bad for the Liberals to be behind in Atlantic Canada and they need to do better in Quebec.

The NDP saw an 8-point loss in the Prairies, and showed weak results elsewhere. No silver lining for them in this poll.

The Bloc is up a tiny bit, but is steady. The Greens are riding high at 17% in British Columbia, though that still doesn't give them a seat in my projection. 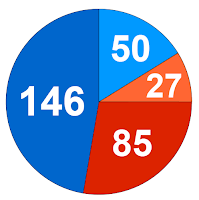 Speaking of which, these are the results for this poll:

So the Tories don't really make any gains from what they currently have, while the Liberals are up a few. The NDP is still the big loser in terms of seats.

The Conservatives would win 70 in the West and North, 55 in Ontario, 10 in Quebec, and 11 in Atlantic Canada.

The demographic breakdown in this poll revealed a few interesting tidbits.

The Conservatives lead in all age groups except those under 25. The Liberals lead there, with 24.7%, while the Greens are second at 23.4%.

All education levels are being led by the Tories, except that the Liberals are back in front among university graduates, 33.6% to 32.8%.

Finally, in Toronto the Liberals lead 40.0% to 36.9%. The Tories lead in Vancouver, Calgary, and Ottawa.

Nothing ground-breaking here, but some very small signs of life in the Liberal numbers. The NDP numbers are back down to earth, doing away with the story line that the NDP is replacing the Liberals as an alternative. The Conservatives are still doing well, but are not in majority territory anymore.
Posted by Éric at 9:14:00 AM