Two new British Columbia provincial polls were released last week, one from the Mustel Group and the other by Angus-Reid. 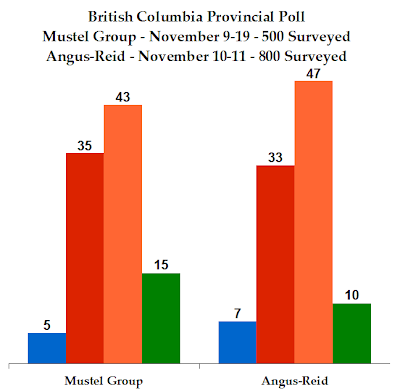 Premier Gordon Campbell has an approval rating of only 34%. That is worse than August's 38% and much worse than May's 46%. NDP leader Carole James doesn't seem to be all that popular, though, with 39% approving of her performance and 37% disapproving.

The Angus-Reid poll shows an even better gap for the NDP in British Columbia.

So what does this mean at the federal level? Hard to say, since the provincial parties don't carry-over to the federal scene. But, for Jack Layton, it can never be bad news to have people voting, or wanting to vote, NDP at either the provincial or federal level. And if the federal NDP manages to own the HST issue, they could get some traction out of it.
Posted by Éric at 10:03:00 AM