Ipsos-Reid has a new poll out, more or less confirming the results of the Angus-Reid poll that was released yesterday. 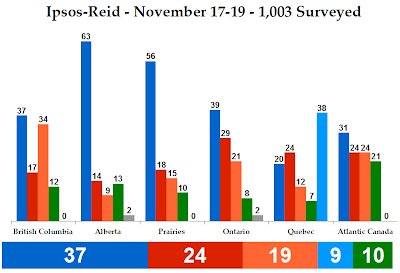 So, another Conservative result just below majority territory, and another Liberal result on the brink of annihilation. This 24% confirms that Angus-Reid's 23% was on the mark, and that the Liberals are actually in a worst-ever scenario.

The NDP saw a big bump from 13% to 19%, which is a very strong pre-writ number for them, especially considering the Greens are at 10%.

The Tories aren't as strong as they need to be in a few regions, however. The 37% in British Columbia isn't enough, and neither is the 20% in Quebec. The 31% in Atlantic Canada, while giving them the lead, is not a big result.

The Liberals are doing badly everywhere. British Columbia and the Prairies would put a lot of their MPs in danger, and 29% in Ontario is another bad, bad result. The 24% in Quebec is alright, that is what Dion got, but the 24% in Atlantic Canada is disastrous. However, small sample size there.

The NDP have to be excited with this poll. At 34% in British Columbia, they max out their potential seat gains. The 15% in the Prairies is bad, though, but 21% in Ontario is great. Their Atlantic and Quebec results are enough to keep what they have.

The Bloc should be happy with 38%, confirming Angus's findings that the Bloc is at or better than their 2008 result. The Greens did alright, particularly in Alberta, but the 21% they earned in this poll in Atlantic Canada has to be due to the small sample size. 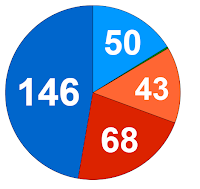 I had to give the Greens a seat in Atlantic Canada. The Tories are kept out of a majority, but not by the Liberals. The Bloc and the NDP take the credit for that. The Conservatives win 69 seats in the West and North, 57 in Ontario, 9 in Quebec, and 11 in Atlantic Canada.

The political picture we're looking at now is that the Tories, Bloc and the NDP are back to 2008 levels. The Liberals, however, are below 2008 levels. If we were headed into an election, the question would be who picks up the two-to-three points the Liberals have lost, and where.
Posted by Éric at 9:50:00 AM