EKOS has their weekly poll out. This gives me the opportunity to show you guys my new way for presenting polling information. 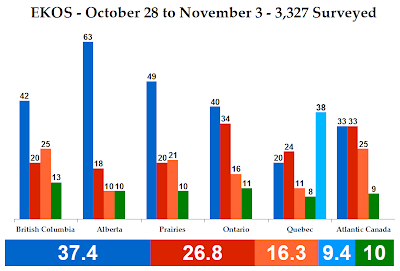 As EKOS points out, the Conservative and Liberal results closely match their results in 2008. The NDP is down and the Greens are up, but on voting day some of that vote will leak to Jack Layton's party. So, this more or less matches 2008. A year has passed, and nothing's changed!

Some of the regional results are worth repeating. In British Columbia, it appears that both the Tories and the NDP are moving up while the Liberals are moving down. This means we're likely to see a very close race in New Westminster-Coquitlam on November 9.

In Ontario, the gap is now six points. The Conservatives are down below 40% and the Liberals are keeping themselves above 30%. The NDP is still really under-performing, however.

In Atlantic Canada, we've been seeing the Conservatives making gains and the race is now a close one. We're unlike to see any ABC campaign by Danny Williams this time around, so the contest in this part of the country will be heated. 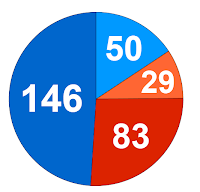 So, a few extra seats for Stephen Harper while the Liberals benefit a little bit from stronger results in British Columbia, Alberta, and Ontario. The NDP still loses eight of the seats they held on election night, while the Bloc picks-up one.

This is, actually, a disappointing result for the Conservatives. They were polling in the 39% to 41% range, or on the cusp of a majority. This actually puts them down, though their dip and the Liberal uptick is both within the MOE. What seems clear, however, is that the movement has stopped and is starting to go back to normal levels.

A projection update will probably come tomorrow, but with only one poll things won't change too much.

UPDATE - As requested, and since this poll is being lauded as the same as the 2008 election, here are the results of that election in the same style of graph as in the polling information above. Open them both in separate tabs, and you can compare easily.