The latest EKOS poll is available online (thanks DL for pointing it out), and has some interesting results. 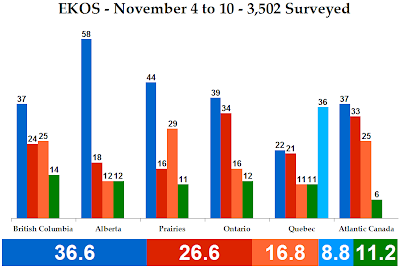 In fact, I love this poll. It vindicates my projection, as I'm sure many of you saw the Conservatives polling at 40% to 41% and wondered why I was still at around 35%. The projection cancels out the sort of momentary extremes the Conservatives were riding on for a few weeks.

We also see an NDP gain of 0.5 points from EKOS's last poll. In general, this is a very good poll for them.

It is not a very good poll for the Conservatives, leaving aside their 10-point lead. They're down five points in British Columbia, five in Alberta, five in the Prairies, and one in Ontario. That's made up by gains of two points in Quebec and four points in Atlantic Canada. Indeed, in that region of the country the Tories are polling extraordinarily well: 36.5%.

The silver lining for the Liberals in this poll is that the bleeding has stopped. They're up four points in British Columbia, but down four in the Prairies and three in Quebec. They're steady in Ontario, Alberta, and Atlantic Canada. The Quebec result, putting them in third, is certainly worrisome. But the by-election results in the province sort of predicted this drop.

For the NDP, they haven't lost any ground anywhere. They are holding fast, though, in British Columbia, Ontario, Quebec, and Atlantic Canada. But they're up two points in Alberta and, most significantly, eight in the Prairies.

The Bloc is down two points, which should come as no surprise after the disappointing by-election result in the Bas-St-Laurent.

About 18% of respondents were undecided, well within the norm.

One of the demographic results that explains the strong NDP showing is in the under-25 age group. There, the NDP is first with 23.9%, followed by the Liberals at 23.8% and the Conservatives at 22.7%. 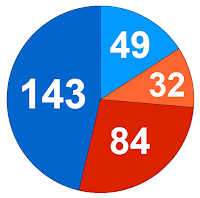 So, almost identical to the 2008 election result. There are some differences, however.

The New Democrats win 13 seats out West (compared to 15 last year), 12 in Ontario (rather than 17), two in Quebec (rather than one), and five in Atlantic Canada (instead of four).

The biggest thing to take from this poll is that we're back to square one, back to October 2008. Which means no one has a reason to go to an election.
Posted by Éric at 11:51:00 PM