Angus-Reid has a new poll out. It shows a massive Conservative lead. 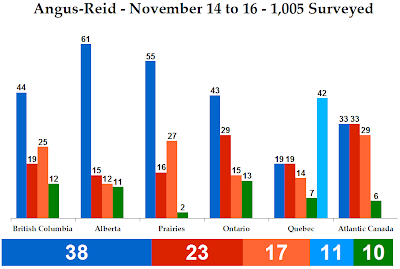 So, at 38% the Conservatives aren't exactly at an all-time high, but that is still a good result. It is, however, two points down from Angus-Reid's last poll at the end of October. The big result from this poll, though, is that the Liberals are at a gruesome 23%, down three points from the last poll. At 23%, the Liberals would be well below Stéphane Dion's sorry 2008 performance.

Surprisingly, the NDP isn't the net beneficiary from the slip of the two major parties. They remain steady at 17%. The Greens pick up three points and the Bloc picks up two.

Regionally, the Conservatives are doing well everywhere except Quebec. The numbers out West are just fine, while the 43% in Ontario is terrific. The 33% in Atlantic Canada is good (could be better), but the 19% in Quebec is troublesome. That is what kept the party below 40% in this poll.

The Liberals have to be worried everywhere. Alberta's result is fine, but the BC and Prairie results mean few seats. The Ontario result is absolutely horrendous, while Quebec's 19% would put them at historic lows. The 33% in Atlantic Canada isn't even very good.

The NDP is doing alright in several regions, but they should really be taking advantage of the Liberal woes. At 25% in BC and 27% in the Prairies, the NDP is competitive but not poised for any gains. The 15% in Ontario would result in some losses, while the 29% in Atlantic Canada won't see them gain any seats either. The 14% in Quebec, though, is good.

The Bloc's 42% in Quebec is a very good result, while the Greens are doing relatively well everywhere except in the Prairies and Atlantic Canada. At 12% in BC, though, Elizabeth May isn't close to getting elected. 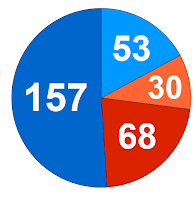 So, with the right opposition numbers, a majority below 40% is possible. The Conservatives take 75 seats in the West and North, 65 in Ontario, 8 in Quebec, and 9 in Atlantic Canada.

The Liberals, at only 68 seats, would barely form the Official Opposition. They take 9 seats in the West and North, 29 in Ontario, 13 in Quebec, and 17 in Atlantic Canada.

The NDP didn't do well enough in the regions they need to, and so take only 11 seats out West, 12 in Ontario, 1 in Quebec, and 6 in Atlantic Canada.

Peter Donolo could not be starting his job from anywhere lower. This is a horrible, horrible poll for the Liberals. The Conservatives can be happy with their own result, but less so about Quebec. The NDP must be wondering why they can't get some traction and overtake the Liberals, while the Bloc should be pleasantly surprised.

So, we're still going to be getting polls now and then. I think I will no longer update the projection at a set day of the week, and instead update as time and polling frequency permits.
Posted by Éric at 10:41:00 AM