Corporate Research Associates have a new Newfoundland & Labrador poll out. 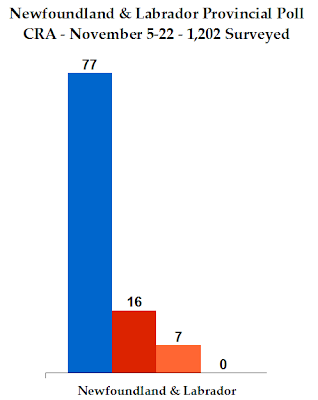 Danny Williams and his Progressive Conservatives have a safe 61-point lead. He's actually five points up from this time last year.

Yvonne Jones and the Liberals are down three points from a year ago, while Lorraine Michael and the NDP is down two points.

Newfoundland & Labrador is not much of a fun political contest to watch. King Williams is an extraordinarily popular leader, with 87% saying they are completely or mostly satisfied with his performance as Premier. That's as close to unanimous as you get in politics. He's the best Premier for 79% of Newfoundland & Labradorians, while Jones gets the nod from only 10%.

I'm going to go out on a limb here, and project a majority government for the Progressive Conservatives in the next election in October 2011. It's ballsy, I know, but I have to follow my gut.
Posted by Éric at 10:56:00 AM