Another month has passed, and it's time to take a look at October's polling average. Twelve national polls were taken during this month, totalling about 22,600 interviews. Here are the results we get at the national level, with the difference from last month's average in brackets.

The Conservatives show a huge jump of three and a half points, virtually all of it coming from the Liberals. The NDP make a small dip of 0.3 points, but that totals one entire point since August. The Greens make up some of the ground they lost in September. The seat projection for these results is as follows, with the difference from last month in brackets:

The Conservatives make a massive 17 seat gain from last month's projection, and are on the cusp of a majority. The Liberals lose 19 seats, but are still a few seats above last year's election. The NDP makes a seat gain but is still 10 down from last year, while the Bloc gets up to 50. 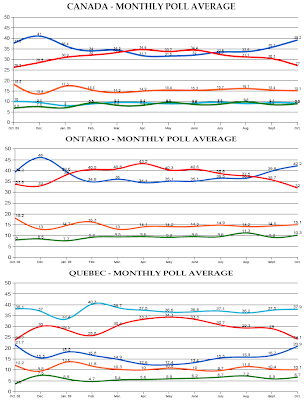 The Tories take a hit, but at 59% I think they'll be okay. The Liberals take a hit as well, but they had gained half-a-point in September. The NDP seems to have been one of the beneficiaries, and is up more than a point. The Greens make a big gain, but it actually matches their big loss from September.

The huge gain by the Conservatives has more to do with two very large numbers (67% and 73%) than anything else, but they are definitely up in the region. The Liberals and Greens take a hit, while the NDP takes an even bigger one.

The Conservatives make another gain in the province and are up more than six points in the last two months. The Liberals take another big hit, and the gap is now at more than ten points. The NDP is up again in Ontario, almost an entire point since August. The Greens are also up, but they had lost two points in September.

The Bloc makes a modest gain and is holding on to their vote. The Conservatives have made a huge gain in the province, but it is coming entirely from the Liberals as federalists are again becoming divided. The NDP shows a small loss, seemingly to the benefit of the Greens. The ups and downs of the Bloc, NDP, and Greens is pretty small, especially when compared to the Tory and Liberal changes. This demonstrates that the movement in the province is almost entirely between these two parties. The Bloc's strength means they should easily hold on to Hochelaga and be expected to keep Montmagny-L'Islet-Kamouraska-Rivière-du-Loup, but the Conservative gain means the race in the latter riding will be a good one.

After a good September, the Liberals show a big loss and now hold the smallest of leads over the Tories in the region. The Conservatives are up almost eight points in the last two months, and look to take Cumberland-Colchester-Musquodoboit Valley in the by-election. The NDP, losing more than five points since August, seem to be inexplicably falling away in Atlantic Canada, as they certainly aren't losing votes to the Greens who also down this month.

The Conservatives have had an excellent month, posting huge gains in British Columbia, the Prairies, Quebec, and Atlantic Canada. They're only down in Alberta, and solidified their significant lead in Ontario. Things are going very well for the Tories right now. There's nothing else to say.

That gain has come almost entirely from the Liberals, who have posted huge losses in every region except Alberta, where they only had a small loss. The decrease in support in Ontario, Quebec, and Atlantic Canada is especially significant, as that is supposed to be their bread-and-butter.

The NDP had mixed results, with gains in Alberta, British Columbia, and Ontario - the last two regions very important for the party. But they also had losses in Atlantic Canada, Quebec, and the Prairies, where they need to do better.

The Greens also had mixed results, up and down everywhere in the country. The decrease in support in British Columbia, where Elizabeth May will be running, is very troublesome for them.