Léger Marketing has released a new poll concerning New Brunswick provincial politics and the sale of NB Power to Hydro-Québec. 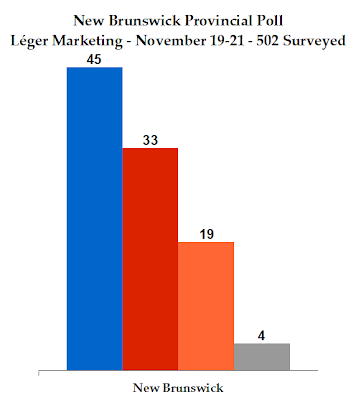 Apparently, it is an unpopular move.

Shawn Graham's Liberals have dropped 14 points from the 2006 election, a huge loss. David Alward's Progressive Conservatives, though, have merely maintained their vote, dropping two points. It is the NDP under Roger Duguay that has become a factor, up 14 points from the last election.

The sale of NB Power is the culprit, as only 22% favour the sale compared to 60% who oppose it. Interestingly, there is a higher proportion of supporters among the francophone population.

The fact that the NDP has benefited from the Liberal woes indicates that New Brunswickers are more unhappy with the Liberals, and looking for an alternative, than attracted by another party. The number of PC supporters, it would appear, is maxed out.

Léger also asked Quebecers what they thought of the sale, and 55% favour it while only 14% oppose it.

New Brunswick is the province that is most likely to have the next election. It is scheduled for September 27, 2010 and since NB has fixed election dates, that will be the date of the election. I hope to give coverage and projections of it at that time.
Posted by Éric at 9:29:00 AM