With the polling results from the month of March, what is the best electoral result each party could cobble together?

We'll start with the New Democrats. 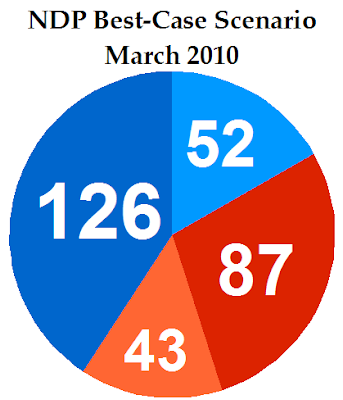 With an estimated national support of 21.3%, the NDP wins 43 seats, matching Ed Broadbent's record in seats and surpassing his record in popular support.

The NDP are pretty close to as good as they have ever been in their history. But a lot of things would need to go their way if Jack Layton hopes to match Ed Broadbent's results. 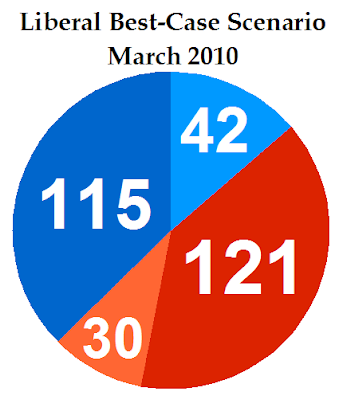 In a close election where the Liberals win 33.1% of the vote, Michael Ignatieff becomes the new Prime Minister after putting together a slim minority.

The Liberals win 24 seats in the West, with strong results in British Columbia (29.6%), Alberta (21.9%), the Prairies (29.2%), and the North, where they sweep. In Ontario, the Liberals take in 39% of the vote and 54 seats. In Quebec, they have 31% support and 21 seats, and in Atlantic Canada they take 42% of the vote and 22 of the seats. They're able to form government thanks to a weak performance by the Bloc Québécois in Quebec and the Conservatives, primarily in British Columbia.

This shows how fragile the Liberal position is. Even under ideal circumstances they can barely win a plurality of seats. For them to have success, the Bloc needs to stumble and the Conservatives need to perform badly out West. In this scenario, their results in Ontario and east of it aren't even that bad.

And now, the Conservatives. 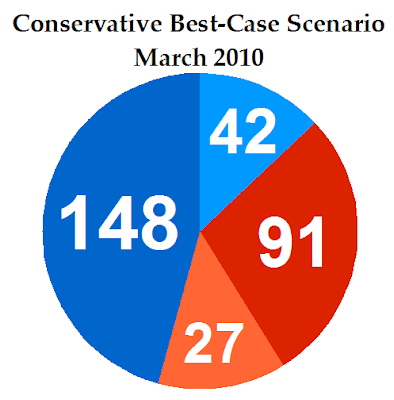 With 37.5% of the vote, the Conservatives win 148 seats and are kept at a minority for the third consecutive time.

Seven seats shy of 155, even if everything goes right. This, more than anything, shows why the Conservatives should not go to an election. It is unlikely that they can win a majority, even if the Bloc is reduced to 31.5% support and 42 seats. They simply can't put together the results they need in the East to go along with what they can win in the West. Would the Conservatives be happy with a small increase in their mandate? Maybe. They would be able to govern for a few more years, but the situation in the House of Commons would remain unchanged.

This is pretty much as good as it gets for the parties within the context of March polling. The best the NDP can hope for is five extra MPs. The Liberals can dream of a minority government, but even if everything goes right it would be won by the slimmest of margins. And the Conservatives, despite their best efforts, cannot get to a majority.

That's probably why we're not going to have an election before Parliament closes for the summer.
Posted by Éric at 10:56:00 AM