Harris-Decima has a new poll out, showing a closer race between the Conservatives and the Liberals than a month ago. 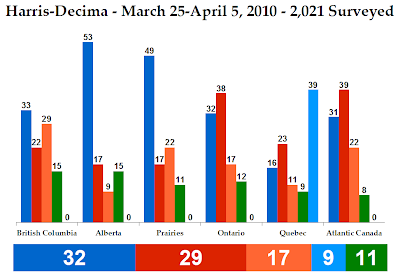 Despite their weakness nationally, the Liberals are doing very well in the most important province: Ontario. They've dropped only one point to 38%, but the Conservatives are down three to 32%. That is a troublesome number for the Tories. A gain of three points for the NDP, now at 17%, is good news for them.

In Quebec, the Bloc drops five points but is still very strong at 39%. The Liberals are up one point but are only at 23%, well below where they need to be. The Conservatives and NDP have each gained one point to 16% and 11%, respectively.

In British Columbia, the Tories are down two to 33%, putting the NDP within range at 29%, up four points. The Liberals are up one to 22%. 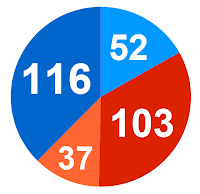 The Conservatives win 69 seats out West, 33 in Ontario, 6 in Quebec, and 8 in Atlantic Canada for a total of 116. Their weak Ontario numbers sink them.

The Liberal and NDP numbers are significant, because together they hold 140 seats, much more than the Tories at 116. It is difficult to imagine the Conservatives governing with only 116 seats, and with the NDP outnumbering the Liberals in the West, the NDP would have a good argument for having an important role in an Ignatieff government.
Posted by Éric at 1:36:00 PM