Angus-Reid has a new Quebec provincial poll that has some very fascinating results. 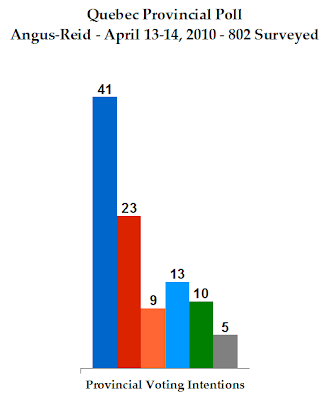 The Parti Québécois has gained seven points over Angus-Reid's last poll in February, and now stands at 41%. The Liberals have completely fallen apart, dropping 10 points to 23%. The Action Démocratique gains three points to 13%, while the Parti Vert gains four points to 10%. Québec Solidaire is down two to 9%.

These are absolutely disastrous numbers for the PLQ. But we can all remember how much of a lead the PQ had when André Boisclair came to the head of the party.

The high level of support for the PVQ is, in my view, an indication that a lot of anglophone voters are moving to their only other option. In the last election, the PVQ ran a distant second on the West Island, but a second nevertheless.

I'm not sure what their current leader's (Guy Rainville) position is, but their previous leader (Scott McKay) took no position on the National Question. He would've allowed his MNAs to vote freely on any sort of referendum legislation.

I project that with these numbers, the PQ would form a majority government with 81 seats. The PLQ would elect only 33 MNAs, while the ADQ would win 9 seats and QS would win 2.

"None of these", however, has a whopping of 34%. One wonders when a leaderless party will be formed.

As to the issue at hand, 58% of Quebecers believe Marc Bellemare has more credibility than the Charest government, which only 11% believe. However, 20% believe neither has credibility.

When it comes to the inquiry Charest has called to look into the allegations, 75% believe it falls short.

80% believe corruption is generalized in the government, not just in the construction industry.

61% of Quebecers believe that the PLQ's fundraisers impose decisions on the party.

These are wretched, horrible numbers for the government. But the PQ shouldn't jump for joy just yet. There seems to be an incredible lack of faith in the governing class, as 80% of Quebecers believe any party in power would be corrupt. Only 13% believe the corruption is specific to the Liberals.

This is not just a run-of-the-mill poll. These numbers are significant, both for the political support each party has and how Quebecers feel about the PLQ and politicians in general.
Posted by Éric at 9:15:00 AM