Léger Marketing released a new provincial poll earlier this week, showing the Parti Québécois well ahead of the provincial Liberals. 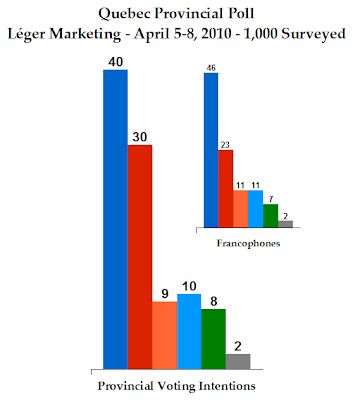 This poll was taken in the wake of a very unpopular budget and rumours of corruption in Jean Charest's Liberal government. With the recent allegations by Marc Bellemare about the PLQ's fundraising, there is no doubt that these bad Liberal numbers will tank even further. At this point, with 77% dissatisfied with this government, it is hard to believe the party isn't at rock bottom.

Compared to Léger's last poll in early March, the PQ has gained two points to reach 40%. The PLQ is down two points to 30%, while the Action Démocratique remains stable at 10%.

Québec Solidaire is down one to 9% and the Greens are up one to 8%.

The PQ's gains have come primarily from the Quebec City region, where they are up 11 points to 39%, and among non-francophones. They've jumped seven points to 14% among this demographic. The PQ leads among francophones with 46% (up one), and is tied with the PLQ in the Montreal region at 35% (down three). They lead outside of these two cities with 46% (up one).

The ADQ has dropped six points in the capital to 18%. This is their one fortress, so that is bad news for them.

The PVQ has gained four points among non-francophones and stands at 12%. This may be the result of Liberal supporters having nowhere else to go.

Pauline Marois of the PQ is the preferred person to be premier, with 27% (up three points). Charest follows with 17%, while Amir Khadir of QS is at 8% and Gérard Deltell of the ADQ is at 7%.

One remarkable fact about these leader numbers is that the number of people who have no opinion or respond "none of them" has risen greatly over the last few years. None of the party leaders seem to be exciting anyone at the moment.