EKOS's weekly poll shows a drop for the Conservatives in the wake of the Guergis affair, which seems to be becoming stranger by the day. 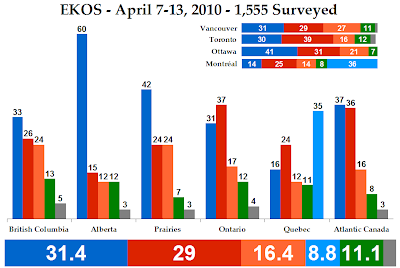 In EKOS's analysis, they say that polling closed to a tie between the Liberals and Conservatives over the last few days. The scandal might be having an effect, and it will be interesting to see what the results will be next week. Of course, whether it will have any long-term effect is another question entirely. My gut says it won't, but also that it just makes it all the harder for the Tories to gain the votes they need to surpass their 2008 electoral result. 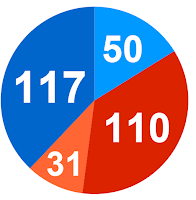 The Conservatives would win 67 seats in the West with this poll. They'd also win 32 in Ontario, 7 in Quebec, and 11 in Atlantic Canada for a total of 117.

The Bloc, though down in support but facing weaker opposition, wins 50 seats.

Could the Conservatives form a government with only 117 MPs? Unlikely. Rather, we'd probably be looking at an NDP-backed Ignatieff government with these sorts of numbers. And while the Liberals stand to pick up a lot of seats with a poll like this, they still can't be happy with 29% support.
Posted by Éric at 10:28:00 AM