EKOS has its weekly poll out, as usual. And, as usual, it has the two major parties at very weak levels. 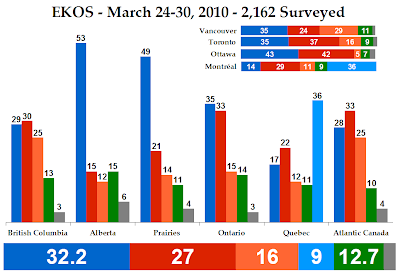 In Ontario, all of the three big parties dropped about two points. The Conservatives lead with 35.3%, the Liberals follow with 32.8%, and the NDP is at 15.4%. All bad numbers. The numbers aren't bad for the Tories in Toronto, however, where they are close behind the Liberals with 35.1%. The Liberals are at 37.2%. In Ottawa, the Liberals (42.3%) have gained six points at the expense of the NDP, and are tied with the Tories who have 42.5%.

In Quebec, the Bloc is down about three points to 35.9%, while the Liberals and Conservatives gained each about a point, and stand at 21.8% and 17.3%, respectively. However, these are well below where they need to be. The Bloc leads in Montreal with 35.8%, followed by the Liberals at 28.9%.

In British Columbia, the Liberals have gained about five points and lead with 29.6%. Yes, lead. The Conservatives dropped four points to 29.4%, while the NDP dropped one point to 25.0%. The Tories lead in Vancouver, however, with 34.8%, followed by the NDP at 28.8% (up eight points). 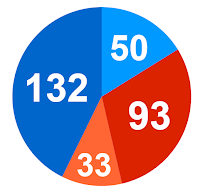 The Bloc would win 50 seats in Quebec.

Since Secretary of State Hillary Clinton brought it up, Angus-Reid has a timely poll on how Canadians feel about extending the mission in Afghanistan into 2011.

If an extension took the form of a combat role, only 16% of Canadians would support it, and 79% would oppose it. That is pretty unanimous, and a good indication of why the Conservative government stuck to its (lack of) guns. Support was highest in the Prairies (23%), while opposition was highest in Quebec (85%).

The events of the last few weeks have seemed to hurt everyone. The Liberals didn't make any headway with their Canada 150 conference (but really, who thought they would?) and the Conservatives haven't made any ground with the abortion and Afghanistan issues still being talked about. What is surprising is that no one is taking advantage of the weakness of the other parties. The NDP and Bloc have managed to keep themselves out of the fray and stable, which relative to the Liberals and Conservatives is a good thing, but the Greens and Others are making gains, likely indicative of a disaffection voters could be feeling towards the traditional parties. Whether those gains would translate into actual voting support, however, is another question entirely.
Posted by Éric at 9:40:00 AM