The Next Leader of the Conservative Party

In the wake of Maxime Bernier's tour of Canada, in which he has lambasted Quebec to receptive Canadian audiences, Léger Marketing conducted a poll asking Canadians who they favoured as Stephen Harper's successor as leader of the Conservative Party. Bernier didn't appear on the list of favourites.

Like it or not, Stephen Harper will eventually step down as leader of the Conservatives. The Prime Minister is still relatively young for a politician at the age of 50, but has spent 17 years of his life involved in politics, when he was first elected to the House of Commons under the banner of Reform. He's been leader of the Canadian Alliance and Conservatives for eight years, and has been Prime Minister for more than four. General opinion is that he will step down if he loses the next election or wins a small minority. We can even say that he would likely step down at the end of a majority government, if he won one. The man can't do the job forever. 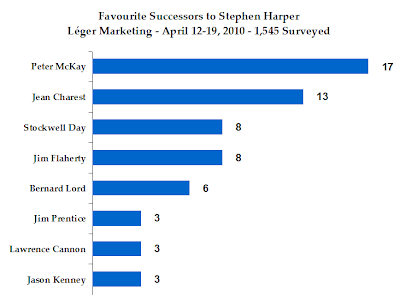 Peter McKay, current Minister of National Defense and Nova Scotia MP, is the favourite of 17% of Canadians and 28% of 'decided' Canadians. At 44, he is one of the younger people on this list. He led the Progressive Conservatives in 2003 and undertook the merger between the PCs and the Canadian Alliance. Some would say that his "Orchard deal" has soured his chances as leader of the Conservatives, but Canadians seem to like him. He's been an adequate minister over the years and hasn't ruffled too many feathers.

Next on the list (13% and 19% of decideds) is Jean Charest, current Liberal Premier of Quebec and aged 51. Charest has always been assumed to have ambitions of being the Canadian Prime Minister. He was one of only two surviving PC MPs in the disastrous 1993 election, and took over as leader of the party until 1998. During that time, he increased the party's representation to 20 MPs and garnered 18.8% of the vote in 1997. He took over the Quebec Liberals in 1998 and became Premier in 2003, winning subsequent elections in 2007 and 2008. Some would say his premiership has been difficult, and he has certainly been a lightning rod of controversy, but his tenure as Premier does give him a record to stand on.

Next on the list (8% and 12% of decideds) is Stockwell Day, 59. Leader of the Canadian Alliance from 2000 to 2001, he came out of the 2000 election with 66 MPs and 25.5% of the vote, an improvement over Preston Manning's 60 MPs and 19.4% of the vote in the 1997 election with Reform. He faced some ridicule as leader but has emerged as an effective minister and now holds the Treasury Board portfolio. He is unlikely to be the next leader of the party, however, due to the baggage that helped sink him in 2000.

Also with 8% is current Finance Minister Jim Flaherty, 60. The oldest among the top candidates, Flaherty first became an MPP in Ontario under the Progressive Conservatives in 1995. He lost leadership bids in 2002 and 2004 for the provincial party, so he certainly has exhibited ambition. But after 15 years in politics, he may be at the tail end of his career and he doesn't seem to have had any sort of personal popularity in the country. For my part, I haven't heard any whispers about him as a possible successor, unlike for McKay, Charest, and the next person on this list.

Rounding out the top five with 6% is Bernard Lord. At 44, he is young and, unlike McKay or Jason Kenney, has a record as a leader. Lord was Premier of New Brunswick from 1999 to 2006, and during that time never lost the popular vote (he lost the election in 2006 but had more votes). He is bilingual and is likable.

Jim Prentice only garnered 3%, but he has been rumoured to be one of the likely heirs. He doesn't have the kind of national profile he would need for a run against someone like Charest, Lord, or McKay, and while he has been a good "fireman" minister, he hasn't exactly done anything spectacular. Lawrence Cannon, also on the list, is highly unlikely as a candidate. Kenney, though rumoured to be a possible candidate, is likely too divisive and right-wing to be a probable winner.

Not on this list, but who could be if Harper's departure becomes a reality, are Bernier, Tony Clement, Christian Paradis, John Baird, James Moore, etc.

We've gotten used to a revolving leadership door for the Liberals, but the Bloc Québécois, Conservatives, and New Democrats have had the same leaders for so long it is difficult to imagine anyone else at the helms. But, it will happen, and the leadership changes for all of these parties will, more than anything, drive their political fortunes for the next decade.
Posted by Éric at 9:22:00 AM