Harper Still Ahead of Ignatieff on Economic Issues

Well, that was a little exciting yesterday, wasn't it? All of the drama will apparently play out over the next two weeks while the government and the opposition try to find common ground on how to deal with these Afghan detainee documents. It's possible that after months of stonewalling the government will not give an inch, but it is more likely that some accommodation will be found in order to avoid an election. We will have to wait and see. For now, it appears the government seems open to compromise, while only Jack Layton of the New Democrats has talked openly of going to an election on this.

If we do go into an election, the economy will, as always, be an important issue. So how do Canadians feel about the abilities of the two men leading the two parties that will form the next government?

Angus-Reid looked into this, along with a slew of other questions concerning Canadians' confidence in the economy. First, let's look at who Canadians trust to "do the right thing for the economy." 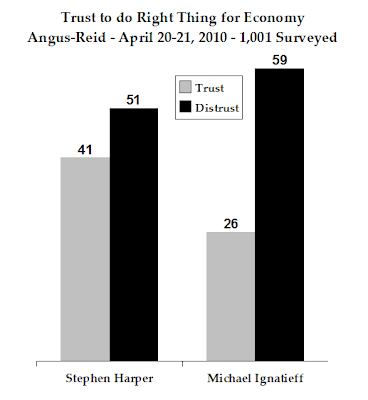 At 41%, Stephen Harper seems to have retained most of Canadians' trust. However, more than half (51%) do not trust the Prime Minister. This compares to the 56% who don't trust Michael Ignatieff, but the 26% who do is alarmingly low. These are not good numbers for the Liberal leader, but it appears that, for once, he isn't significantly lower than the support level of his own party.

How about some more specific issues? Here, the gap is much smaller and the Liberals perform better. However, the Conservatives still have the lead on all of these issues. 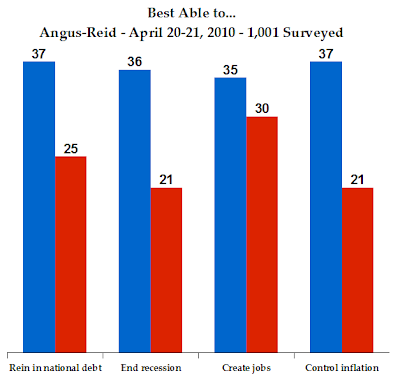 The closest comes under the rubric of creating jobs. While 35% believe the Conservatives would be best able to do this, 30% believe the Liberals are. That is a positive sign for Ignatieff, but in the other categories it isn't as nice.

At 21% to 30%, the range of people choosing the Liberals was more varied. The party did worst on the "end recession" and "control inflation" questions, with 21%, and slightly better on the "rein in national debt" question.

The Conservatives still have an important edge on this important voting factor. It is remarkable that despite all of the problems the Tories have been having the Liberals haven't been able to move at all. It really is an indication that the drop the Conservatives have seen (ranging from two to eight points since the 2008 election, depending on the poll) has nothing to do with the performance of the Liberals or the willingness of Canadians to vote for them.

After more than four years in power and seven with the same leader, it shouldn't come as a surprise that Conservative support has stagnated or even sagged. But the Liberals should be flying higher as the governing alternative with a new leader. They need to do something to get Canadians interested again.
Posted by Éric at 10:39:00 AM