Léger Marketing has a new federal poll out for Quebec, and shows a little movement. 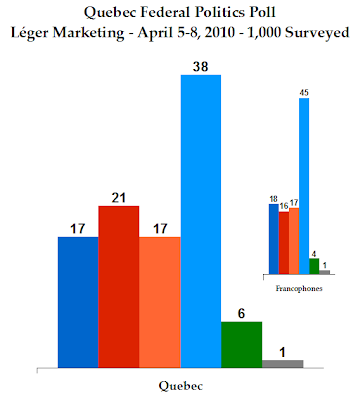 The Bloc Québécois is well in front, gaining one point since Léger's March 8-11 poll. They have 38%. The Liberals have dropped four, however, and are at 21%. That is problematic for them.

The New Democrats gain three points and stand at 17%, while the Conservatives are stable at 17% as well.

The Bloc is doing very well among francophones, with 45% support. The Conservatives are next, with 18%, up four points. Then it is the NDP with 17% (up three), and finally the Liberals at 16% (down five). That is a very worrisome place for the Liberals.

In and around Montreal, the Bloc is down four to 32%, followed by the Liberals at 29%. The NDP is up four to 18%, making Thomas Mulcair smile.

In and around Quebec City, the Bloc is ahead with 34%, followed by the Conservatives at 27%. It is still their base of support. The Liberals have dropped five points to 17% in the capital.

In the rest of Quebec, the Bloc dominates with 44% (up five). The Conservatives followed with 21%, while the Liberals are down six to 14%.

For some reason, the Liberals have lost a good chunk of support outside of Montreal. Nothing has really happened that would explain it, however, so it could be a statistical anomaly. 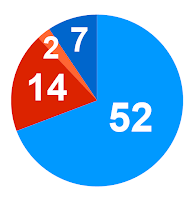 The Bloc would win 52 seats with this poll, while the Liberals would take 14 and the Conservatives would keep 7. The NDP would win 2.

Nothing much new here but some unhappy numbers for the Liberals and continuing trouble for the Conservatives. Things are fine, however, for the Bloc and NDP.
Posted by Éric at 11:41:00 AM