Harris-Decima, who now seems to be the pollster with the largest sample sizes, has a new poll out. To my knowledge, I don't think the Liberals and Conservatives have ever been both below 30% since the Progressive Conservatives and Canadian Alliance merged back in 2003. But considering I went out to get the mail in a T-shirt yesterday and it is currently snowing in the capital, weirder things have happened. 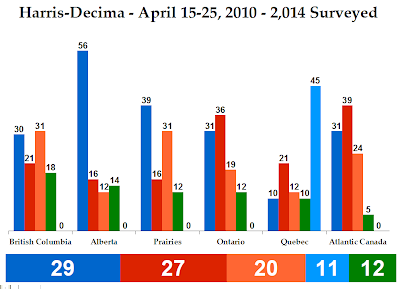 Compared to Harris-Decima's last poll earlier this month, 29% represents a drop of three points for the Conservatives. The Liberals are also down two points to 27%. This seems to give some credence to the low-scoring EKOS polling we've been seeing this year.

The New Democrats appear to be the beneficiaries, with a gain of three points. They currently stand at 20%. The Bloc Québécois is also up, two points nationally to 11%, and the Greens are up one to 12%.

Complete disillusionment with the two main parties seems to characterize this poll. But, there are some things the Liberals can take from this poll with a smile.

The main one is in Ontario, where the Liberals are up two points and lead with 36%. The Conservatives have dropped one to 31% while the NDP is up two to 19%. Decent number for the Liberals, excellent for the NDP.

Quebec, however, is a wasteland for the two major federalist parties. The Bloc is up six points to 45%, one of the higher results we've seen for them. The Liberals are down two to a pitiful 21%, while the NDP is up one to 12%. The Conservatives have dropped big here, six points to 10%.

In British Columbia, while the numbers might look strange on the face of it, there has been very little movement. The NDP is up two and now has the lead with 31%. The Conservatives are down three to 30% and the Liberals are down one to 21%. The Greens make an important jump of three points, rising to 18%. 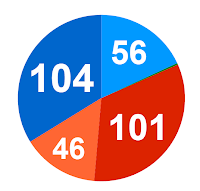 The Bloc wins 56 seats in Quebec against extremely weak opposition.

The Greens win one seat in British Columbia (guess who).

An incredible seat result. Both major parties are reduced to around 100 seats, and the NDP and Bloc win massively, setting records for their best performances. Even the Greens get in. With this sort of result, you have to think the Liberals and NDP would work together to form a government. The Conservatives simply can't be expected to continue governing with only 104 seats and a plurality of three, and the NDP can't be expected to be kept out of government with a caucus half as large as the Liberals, and a popular vote only seven points behind them.

Oddly enough, this sort of result resembles the sort of three-way electoral race we're seeing in Great Britain. Are Anglo-Saxons (tongue-firmly-in-cheek) sick of the traditional parties?
Posted by Éric at 8:58:00 AM