Support for Mission in Afghanistan Low

An EKOS poll indicates that support for the Canadian mission in Afghanistan is low, and that opposition to an extension of the mission is now a majority opinion. 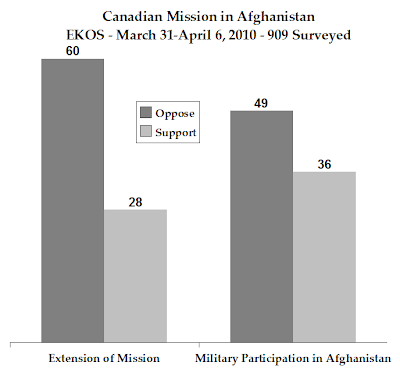 The Canadian Armed Forces have now been in Afghanistan for more than eight years, and have been in the wilder Kandahar region for four. That is a long deployment in a warzone for the 2,500 to 2,800 men and women in the country.

This EKOS poll shows that Canadians are feeling that war weariness. Only 28% would support an extension of the mission beyond July 2011, despite Secretary of State Hillary Clinton's request that we stay. Fully 60% of Canadians oppose the idea.

Opposition is highest in Quebec, where 68% say they would oppose an extension. The lowest level of opposition can be found in Atlantic Canada and Alberta, but even there opposition is at 53%.

There is no significant difference of opinion among the different age groups and education levels, but there is a definite split along gender lines. While 54% of men oppose an extension, 66% of women feel the same way.

No matter how people vote, opposition is still a majority view. It's lowest among Conservatives (52%) and Liberals (57%), however, and highest among Bloc Québécois supporters (76%).

When it comes to the mission itself, let alone any extension, opposition is almost at the magical 50% mark, with 49% of Canadians say they oppose Canadian military participation in Afghanistan. Opposition is highest in Quebec, with 62%.

Support is only at 36%, and is highest in Alberta at 50%. Only 21% of Quebecers support the mission.

Again, there is not much variation when broken down by age and education level. But women split 55-28 against the mission, while men are more undecided (44% oppose, 45% support).

Support is highest among Conservative supporters, at 48%. However, 36% of Tories still oppose the mission.

Most of the news concerning Afghanistan in this poll's field days were about the detainee issue and President Harmid Karzai's corruption. Canada's last combat death, that of Corporal Darren J. Fitzpatrick, was on March 20 and so far this year three Canadian soldiers have lost their lives in Afghanistan. While any loss is heart-wrenching, at this time last year ten Canadian soldiers had lost their lives.

One can be led to think that these high levels of opposition to the mission have less to do with the sacrifices that have been made and have to be made, and more with Canadians questioning why, indeed, we're there.

On a completely different note, Gilles Duceppe will be appearing on CBC's The Hour tonight (Thursday) at 23h00. Could be interesting television.
Posted by Éric at 9:32:00 PM