Not Much Change in Manitoba

This Probe Research poll on the federal voting intentions of Manitobans shows not much change, though the Liberals are doing better in the province. 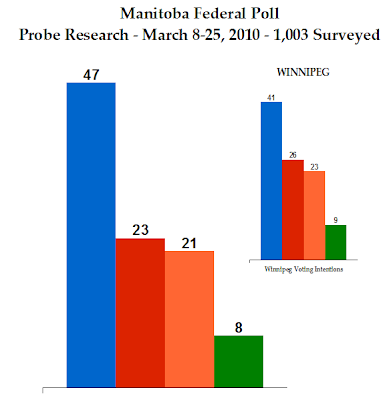 When compared with the 2008 election, we see the Conservatives have dropped two points, the Liberals have gained four, the NDP has dropped three, and the Greens have gained one. With a MOE of 3.1, I'm not sure if we can read anything into these numbers. But it seems that while the Tories are stable, the Liberals are making gains at the expense of the NDP.

In Winnipeg, where eight of the 14 Manitoba ridings are located, the Conservatives lead with 41%, down two points from the 2008 election. The Liberals are up three to 26%, while the NDP is down four to 27%. The Greens are up three to 9%.

While this isn't much of a difference, a change like this could cause Elmwood-Transcona and Saint Boniface to be at play. If the changes in support were uniform, it would put the NDP and Conservatives neck-and-neck with 39% in Elmwood-Transcona, endangering NDP MP Jim Maloway.

In Saint Boniface, Conservative MP Shelly Glover would see her support drop to 44% while the Liberals would be up to 40%.

Aside from that, no other riding appears to be at play in Winnipeg.

Outside of the provincial capital, the Conservatives dominate with 58%, which seems to be about where they were in the 2008 election. The Liberals and NDP are tied at 17%, which seems also to be around 2008 levels though the Liberals look like they've gain a couple of points.
Posted by Éric at 10:49:00 AM