Ipsos-Reid has a new poll out, showing a big Tory lead but no changes outside of the margin of error of 3.1 points. 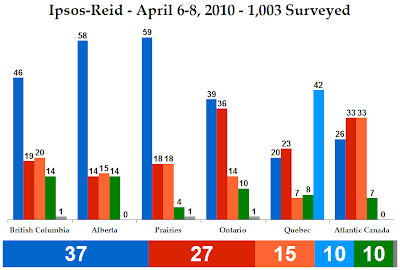 Compared to Ipsos-Reid's March 16-18 poll, the Conservatives have gained three points and are at 37%, while the Liberals are down one to 27%. The New Democrats are also down, dropping three points to 15%. The Bloc Québécois is up one point nationally to 10% while the Greens are steady at 10%.

Note that this poll was taken between April 6 and April 8. While that straddles part of the Guergis affair, the real stuff happened on the 9th. We'll have to wait and see what other pollsters find this week.

In Ontario, the Conservatives are up six points to 39%, while the Liberals remain steady at 36%. Considering the low performance of the Liberals in this poll nationally, that is actually a surprisingly good result. The NDP drops five to 10%.

In Quebec, the Bloc gains seven points and is at 42%. The Liberals drop four to 23% while the Conservatives are steady at 20%. The NDP drops four to 7%, one below the Greens at 8%.

In British Columbia, the Tories gain three and have a commanding lead with 46%. The NDP drops two to 20% and the Liberals gain two and stand at 19%. 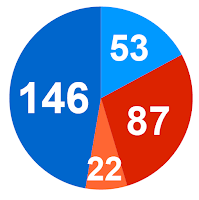 The Conservatives would dominate in the West, winning 80 seats (out of 95!). They also win 51 in Ontario, 8 in Quebec, and 7 in Atlantic Canada for a total of 146. Close, but no cigar. Generally speaking, everyone holding a Tory seat now is re-elected.

This poll is a little out of step with what we've been seeing lately, which isn't new for Ipsos-Reid. But, they have sometimes been vindicated before so we'll have to wait and see what the other pollsters come up with this week.

I've placed comments on moderation. I'm generally at the computer most of the day, so there should be little delay in approving your comments. I was already receiving all of your comments in my inbox, and reading through them, so this is actually no more work for me than having no moderation at all. Believe it or not, I do get quite a bit of spam (particularly on older posts) so this is an easy way to avoid that. It also allows me to halt any of the flame wars that spring up now and then. Rejection will be used sparingly, so don't hesitate to post.
Posted by Éric at 9:59:00 AM