My apologies for missing this Nanos poll from the beginning of February, but better late than never. 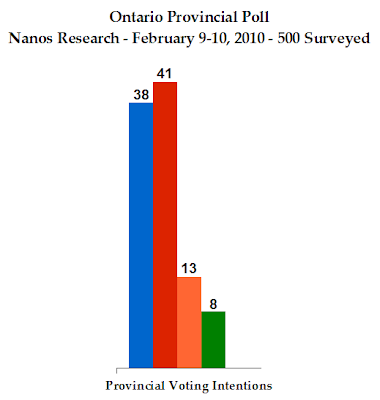 This poll shows that the race between the Ontario provincial Liberals are maintaining a small lead over the Progressive Conservatives. The gap is only 3.5 points (41.4% to 37.9%), less than the margin of error. But this is also what we've been seeing since November 2009.

The last Ontario poll I have is an Ipsos-Reid poll, taken in mid-December. In that poll, the Liberals led the Progressive Conservatives 38% to 34%. The previous Nanos poll, taken in November, showed a gap of only two points, 37% to 35%. So, clearly, the two parties are neck and neck and have been for months - but still Dalton McGuinty is ahead.

The New Democrats seem to be struggling. They had 17% in that November 2009 Nanos poll, were at 15% in that December Ipsos-Reid poll, and are now at 12.8%. The federal NDP is not going badly in the province, so this could be statistical noise.

Unless something catastrophic happens in the provincial legislative assembly, there is still 19 months until the next campaign in the province. Maintaining this small lead for that period of time may be enough - McGuinty would likely have an advantage over campaign-rookie Tim Hudak.
Posted by Éric at 8:54:00 AM